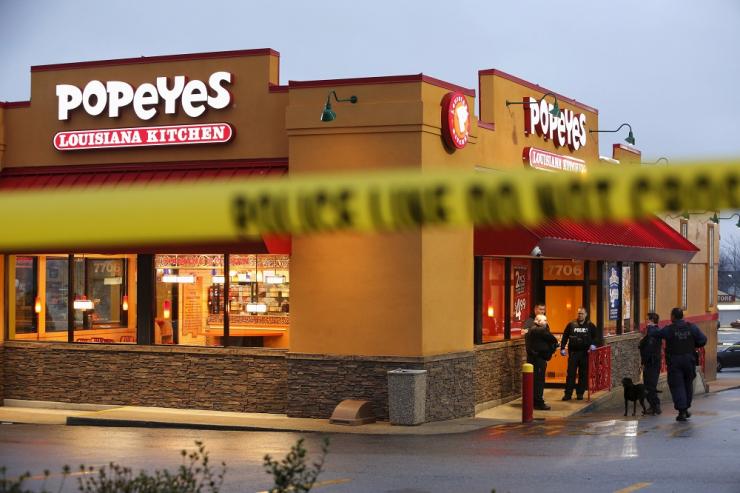 Police officers search for evidence in the shooting death of a Prince George’s County Police officer at a Popeye’s chicken restaurant near the primary crime scene where the officer was shot in Landover, Maryland March 13, 2016.

More than a year after KFC was accused by a California man of being served fried rat instead of fried chicken, on Sunday, it was the turn of Popeyes in Harlem to be accused of the same animal. A woman from New Jersey complained that a fried rat was served to her daughter, niece and sister.

The rat head was allegedly served by Popeyes, a fried chick fast food outlet, at 145th St and Frederick Douglas Boulevard, reported New York Daily News. On seeing the rodent in their meal, the three vomited and had diarrhea and had to be taken to urgent care, complains Rosemary Thomas, reports Metro. In its report, the department notes of violation on possible food contamination or improper discarding of food. Since 2013, three checks have been made by the department which found “evidence of mice or live mice present in facility’s food and/or non-food areas.” The restaurant remains “not vermin proof” as of May because harborage or conditions conducive to attracting mice in the dining establishment or allowing the rodents to exist.

The family is represented by Paul Ajlouny, a personal injury lawyer, although he has not been informed yet about the action that the Thomas family plans to take against Popeyes.

Renee Krapowski, spokeswoman of the fast food, said the franchise owner had contacted the department and a later inspection did not find anything that would change Popeyes’ “A” rating. The owner has contacted the Thomas family and was scheduled to meet them on Monday night, likely to receive the fried rat head.

But she adds, according to the fast food’s supplier, it is possibly a chicken organ instead of a rat. The piece would be sent to a third-party for DNA testing.