A top mainstream fact-checker wrote on Tuesday that the Kente cloths that Democrats wore earlier this month after the death of George Floyd were “historically worn” by an “empire involved in [the] West African slave trade.”

House Speaker Nancy Pelosi, Senate Minority Leader Charles Schumer, and other top Democrats wore the cloth to an event on June 8 in response to Floyd’s death, which was widely criticized online.

USA Today fact-checked the following statement from a Facebook user:

Yesterday the Democrats wore kente scarfs and knelt down for their photo op. So check this out, Kente cloth was worn by the Ashanti. It’s made of silk so the affluent wore it. The Ashanti were also known as slave owners and traders. Huh? … This makes me wonder why they chose to wear this particular tribe’s garb.

It’s important to note that the cloth has historical significance that extends beyond the slave trade and has “become a symbol of pride for African Americans over the last 50 years.”

USA Today rated the claim “true,” saying that the “kente cloth was historically worn by the Asante people of Ghana, who were involved in the West African slave trade.”

Tutu, who lived from 1660 to 1712 or 1717, unified several small Asante kingdoms to create the Asante empire. He is credited with expanding the Asante throughout most of Ghana and introducing his subjects to the gold and slave trades along the West African coast.

The Asante supplied British and Dutch traders with slaves in exchange for firearms, which they used to expand their empire. Slaves were often acquired as tributes from smaller states or captured during war. Some slaves were brought across the Atlantic whiles others stayed in Africa to work in gold fields.

According to the BBC, by the end of the 18th century the region exported an estimated 6,000-7,000 slaves per year.

After Democrats wore the cloth, The Daily Wire highlighted how various reports noted that the cloth typically signified patriotism or was worn to celebrate special celebrations.

Pro-life advocate Obianuju Ekeocha, who lives in Africa, released a video on Twitter condemning the Democrats for “ignorantly using the Kente fabric as a prop in their virtue signaling.”

“I was just looking online today like most of you and what did I see? A bunch of Democrat politicians kneeling down, of which I have nothing to say about that because I am not an American, however, they were all having around their necks this colorful fabric which I’m sure they put around their necks as some kind of mark or show of unity or solidarity with black people,” Ekeocha said. “So, in other words, they put in for the Kente material or this colorful fabric they had around their necks as some kind of placating sign or symbol to show that they are not racist and they are together with black people.”

“Excuse me, dear Democrats, in your tokenism, you didn’t wait to find out that this thing that you’re hanging around your neck is not just some African uniform, it’s actually the Kente material,” Ekeocha continued. “The Kente belongs to the Ghanaian people, mainly the Ashanti Tribe. Excuse me, Democrats. Don’t treat Africans like we’re children. These fabrics and these colorful things that we have within our culture and tradition, they all mean something to us. I know you look at us and you say, ‘oh Africans are so cute in all your colorful dresses.’”

“Well, some of those dresses and patterns and colors and fabrics actually do mean something to us,” Ekeocha added. “Some of them belong to ancient tribes and mean something to them. So why are you using it your own show of non-racism or your own show of virtue? Why are you using the Kente material to signal your virtue? Stop it. We are not children. Africans are not children. And leave our tradition and our culture to us and if you don’t know much about it, ask somebody. I’m sure there would have been something else you could have done to show your solidarity with black people instead of taking the Kente material and making a little show of it.” 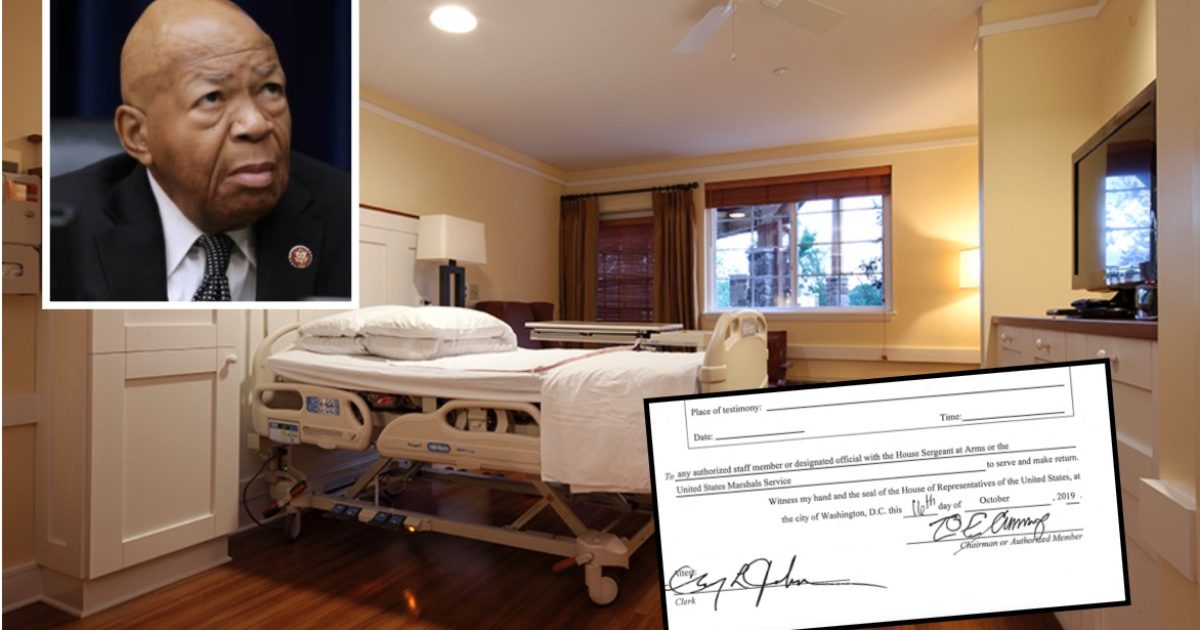 Elijah Cummings was kept busy to the very end of his life leading an investigation into Donald Trump before passing away at the age of 68 on Wednesday, his aides have said.

The chairman of the House Oversight Committee was signing subpoenas from his hospital bed, one aide told the New York Times.

House Speaker Nancy Pelosi described Mr Cummings as a “north star” who spoke with “unsurpassed clarity and moral integrity” on the House floor.

Ms Pelosi, who grew up in the city Mr Cummings represented, said he was her “brother in Baltimore” during a press conference on Thursday, adding: “We’ve all lost a friend … I’m devastated by the loss.”

Despite not having participated in a roll call vote since September, the late congressman was continuing to spearhead the oversight committee’s impeachment inquiry into Mr Trump along with two other House committees handling the investigation.

He has sparred with Mr Trump since the president took office, condemning the humanitarian crisis on the US-Mexico border during a fiery speech and decrying his attempts to ban residents of Muslim-majority nations from entering the country as “unconstitutional” and “un-American”.

Mr Trump consistently attacked Mr Cummings online, calling the congressman a “racist” then describing his majority-black district as a “disgusting, rat and rodent infested mess” in which “no human being” would wish to live.

The president tweeted his “warmest condolences” to Mr Cummings’ family and friends, writing: “I got to see first hand the strength, passion and wisdom of this highly respected political leader.”

He added: “His work and voice on so many fronts will be very hard, if not impossible, to replace!”

The House announced its intentions to continue the impeachment inquiry against Mr Trump in the wake of Mr Cummings’ passing. 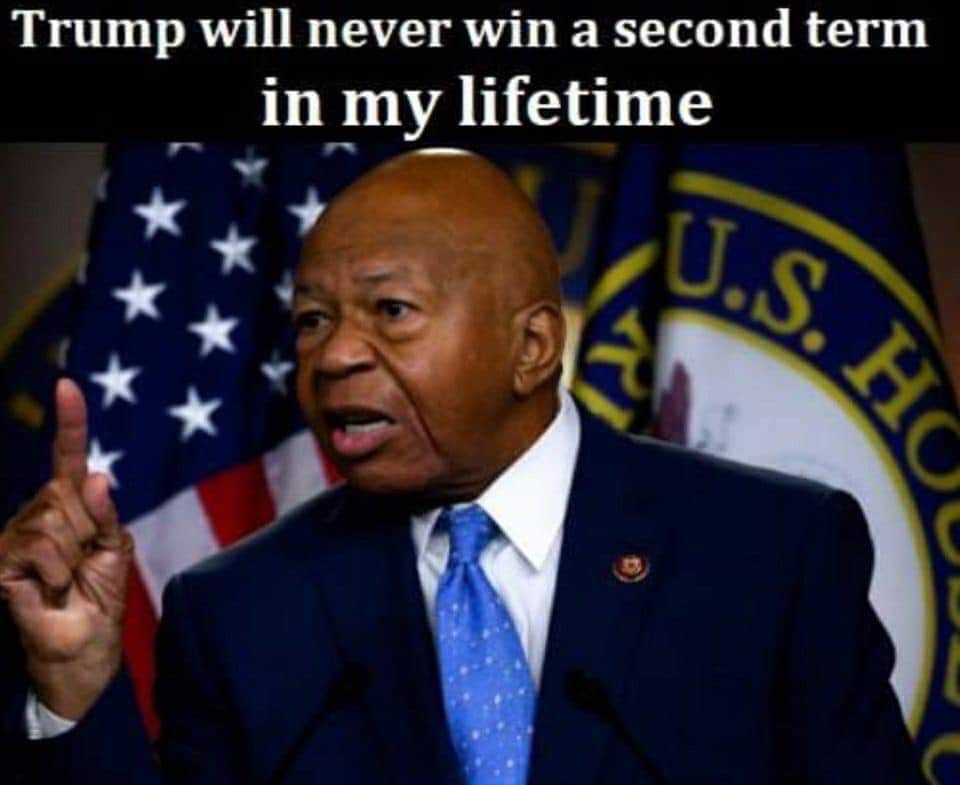 News of his death came as Gordon Sondland, the ambassador to the European Union, testified on Capitol Hill.

He turned on Mr Trump in a rare rebuke from a sitting ambassador and admitted he was “disappointed” by the president’s decision to have his Ukraine agenda go through his personal attorney, Rudy Giuliani. 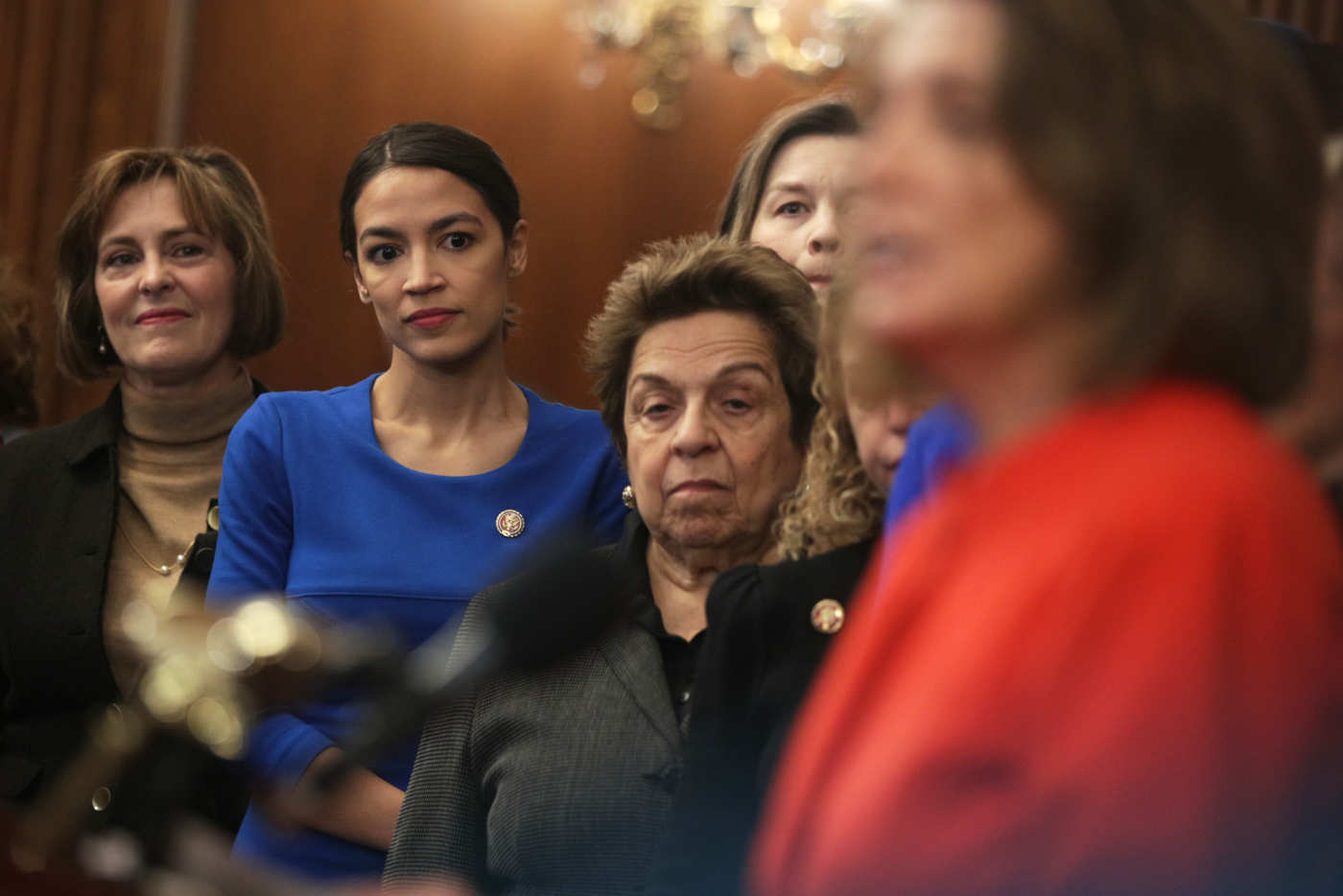 Earlier this week the Democrats now running the House of Representatives strutted their stuff with passage of a bill aiming at the ancient liberal target of the gun background check “loophole” for private sales. It was passed by a 240-190 margin on what was basically a party-line vote. But before that vote, Republicans offered an unexpected “motion to recommit” the bill to add language instructing law enforcement officials to notify ICE if an “illegal immigrant” attempted to buy a gun. Twenty-six Democrats voted with Republicans in favor of that motion, and embarrassed House leaders added the language as an amendment to keep the bill from dying then and there.

Subsequently House Democrats met to discuss the incident (the second successful MTR maneuver by Republicans in the brief period since Nancy Pelosi took the gavel), amid some talk of amending the House rules either to eliminate MTRs or provide members with more time to consider them. But according to the Washington Post, recriminations broke out between members angry at the defections on the ICE vote, and defectors angry that Democrats from safer districts weren’t sufficiently sensitive to their political needs.

In a closed-door session, a frustrated Speaker Nancy Pelosi (D-Calif.) lashed out at about two dozen moderates and pressured them to get on board. “We are either a team or we’re not, and we have to make that decision,” Pelosi said, according to two people present but not authorized to discuss the remarks publicly.

Pelosi, according to the Post, focused much of her frustration on congressional veterans. But interestingly enough, the conflict was exemplified by an unhappy exchange between two House freshman from very different political environments:

[Alexandria] Ocasio-Cortez (D-N.Y.), the unquestioned media superstar of the freshman class, upped the ante, admonishing the moderates and indicating she would help liberal activists unseat them in the 2020 election.

Corbin Trent, a spokesman for Ocasio-Cortez, said she told her colleagues that Democrats who side with Republicans “are putting themselves on a list.”

… Rep. Xochitl Torres Small (N.M.) — reacted sharply to Ocasio-Cortez’s comments and rose to urge her colleagues to respect the political reality of representing a swing district, according to multiple people present.

Ocasio-Cortez, of course, unseated a top member of the House Democratic leadership in a primary; her district is not competitive in general elections. Torres Small won one of the closest general election contests in the country.

But this wasn’t just a standard-brand left-versus-center ideological clash. AOC made a rather important counterpoint about the quandary the Republican amendment placed her and like-minded Democrats in, according to her spokesman Corbin Trent:

“She said that when activists ask her why she had to vote for a gun safety bill that also further empowers an agency that forcibly injects kids with psychotropic drugs, they’re going to want a list of names and she’s going to give it to them,” Trent said, referring to U.S. Immigration and Customs Enforcement.

The Post interpreted this reference to a “list” as a threat to support primary challenges to the moderates. Whether or not that’s what AOC intended, there’s no question some of her House colleagues fear that she’ll help do to them what she did to Joe Crowley in her own insurgent primary challenge last year. And it infuriates those in swing districts that they might have to fight a two-front war to win reelection.

These tensions create some serious problems for Nancy Pelosi, who must cater to every faction in her caucus. One option for her is simply to impose party discipline and insist moderates bite the bullet on cleverly designed Republican poison-pill amendments. As she and others pointed out in the caucus meeting, Republicans managed to vote down similar Democratic gambits routinely when they controlled the House, adopting a “just say no” party line on all procedural motions from the other side of the aisle.

Alternatively, Pelosi may have to rethink how much value there really is for her caucus and party in “messaging” bills like the gun measure, which is about as likely to be considered in the Republican-controlled Senate as a bill to double Planned Parenthood’s funding. A symbolic gesture toward an important if presently unachievable goal like better gun regulation is a lot more effective if Democrats can agree in advance not to let themselves get distracted by Republican hijinks. The last thing they need is a public “struggle for the soul of the Democratic Party,” with media hounds eagerly feeding on every morsel of conflict.

Did you laugh as hard as we did when Trump canceled Pelosi’s PR flight?  Donald Trump Troll Level, Master of the Universe!

Speaker Pelosi is using her position to get revenge on Trump and doesn’t care who gets in the way. The Democrats need to grow up. They have not gotten over Hillary losing in 2016 and want revenge. They are now the party of “Hate Trump.”

Adam Schiff was going to tag along for the ride with Pelosi, and so he naturally attacked Trump for refusing them free passage. Ostensibly Pelosi’s and her team were going to help encourage the EU and NATO, as well as the warmongering military industrial complex that wants us to permanently stay in Afghanistan

Pelosi and Schiff still don’t realize Trump is a fighter and will punch back if attacked. He isn’t fighting for himself; Trump is fighting for America. It’s time the Democrats stop seeking revenge and work with Trump to make America great, safe and prosperous for ALL American citizens.
—Ben