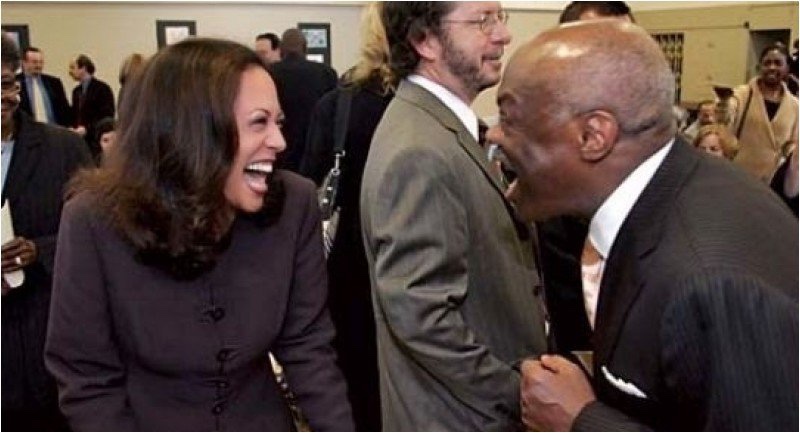 Kamala Harris was grandstanding again as she tried to bully Attorney General Jeff Sessions on Capitol Hill. Sessions, with his smooth southern drawl, outsmarted and outclassed Harris, who came off as a screaming shrew, and it’s no wonder with her tawdry past. Harris has a dirty little sex secret that is coming back to haunt her, but that’s not all. She has a long line of corrupt deals, one with Maxine Waters, that helped her get power and stay in power.

If there ever was a swamp creature in Washington, D.C., it is Kamala Harris. In fact, she is the poster politician for all swamp creatures. Harris has been trying to make a name for herself by screaming and bullying two of the good guys left in D.C., Admiral Mike Rogers and Jeff Sessions. Well, the junior senator from California didn’t come out unscathed, as her dirty little sex secret has come out.

Harris got her start in 1994 by having an affair with slimy Willie Brown, who was serving as the California Assembly Speaker and then became the mayor of San Fransico. Brown was 60 years old and Harris was 29 when their affair began. Harris was so brazen that she came out publicly as his date at his 60th birthday party, despite his wife of 36 years being in attendance.

Says the woman who began her political career as Willie Brown’s mistress.

Harris slept with Brown for one reason; she used the corrupt San Francisco mayor to launch her rise to power. Daily Caller reports, “As Brown’s time as speaker drew to a close in 1994, he named Harris to the California Medical Assistance Commission, a job that came with a $72,000 annual salary. Brown had previously appointed her to the state Unemployment Insurance Appeals Board.”

She “was described by several people at the Capitol as Brown’s girlfriend,” the Los Angeles Times reported at the time. Although that job paid nearly $98,000, Harris’ term was set to expire in five weeks when Brown tapped her for the Medical Assistance Commission slot. That body met only monthly, and the $72,000 position was not considered a full-time job.

#KamalaHarris is a disappointment & a grandstanding fraud. She doesn’t want answers, she wants to make a name for herself. #SessionsHearingpic.twitter.com/0o9cyPykYz

Willie Brown is a sleaze-bag who led one of the most corrupt mayoral offices ever seen in San Fransico, but that was fine with Harris, who went on to steal the election for California’s Attorney General in 2010. “Los Angeles District Attorney Steve Cooley led Harris by 34,000 votes after more than 7 million were counted. But after provisional ballots were counted, she was declared the winner by approximately 50,000 votes,” reports Daily Caller.

At one point, Cooley was up by 62,000 votes, and in panic mode, Harris reached out to her good buddy California Secretary of State Debra Bowen, whose role was to certify the votes. That’s when thousands of Cooley’s votes just disappeared.

Kamala Harris’ path to power is strewn with illicit affairs and fraudulent elections, and in desperation, she paid Maxine Waters’ daughter Karen $63,000 dollars to appear on mailers with Auntie Maxine. Washington Free Beacon reports, “The payments were made from Harris’s campaign committee and transferred to Waters’s campaign committee through a lucrative ‘slate mailer’ operation run by Waters’s daughter, a program that has proved profitable for both her daughter and the campaign.”

Liberal loons are grasping at straws on social media, hailing Harris as the savior they need, and anyone who questions their new “it” girl gets called a racist and a misogynist. Harris is nothing that any little girl should aspire to be; she is just another swamp creature who got there by having sex with a 60-year-old buffoon.

But, the biggest travesty is this D.C. swamp creature questioning an honorable man like Jeff Sessions; she isn’t fit to carry his shoes, let alone question his patriotism. She wouldn’t know patriotism if it hit her in the face, so we say bring it on in 2020 as the liberals call for Harris to run against Donald Trump. We’d love to see the president come up with her nickname. If you thought Crooked Hillary was good, you haven’t seen anything yet. 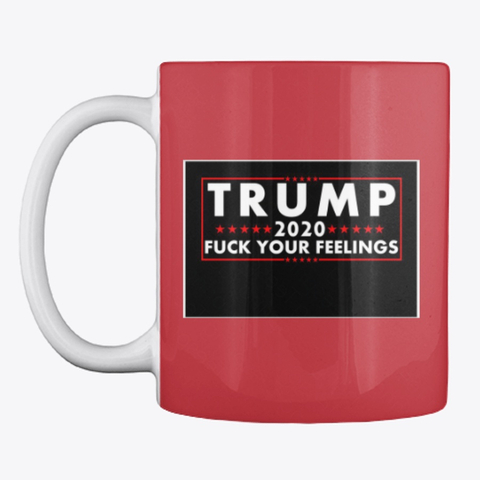 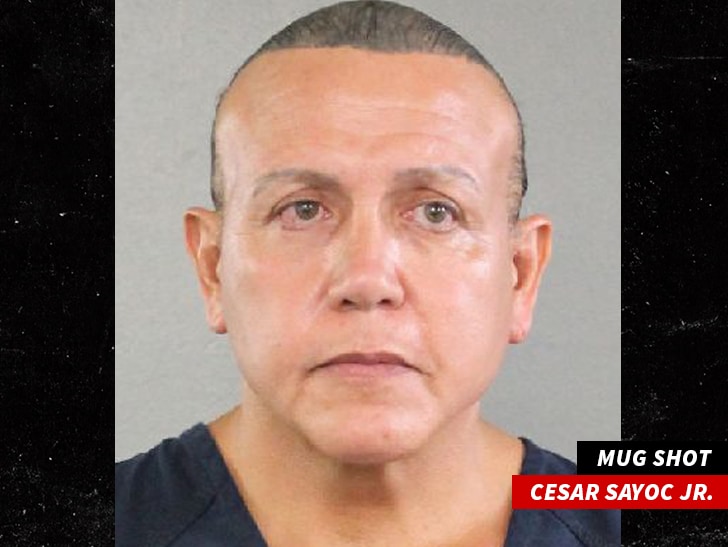 11:52 AM PT— During a DOJ press conference, Attorney General Jeff Sessions announced Sayoc has been charged with 5 federal crimes — interstate transportation of an explosive, illegal mailing of explosives, threats against former Presidents, threatening interstate communication and assaulting current and former federal officers. If convicted, Sayoc faces up to 58 years in prison.

FBI director Chris Wray said, after the FBI’s initial analysis, “They found a latent fingerprint from one of the envelopes sent to Congresswoman Maxine Waters,” adding that Sayoc’s DNA was also linked to multiple packages delivered. “These are not hoax devices,” Wray said.

NYPD Commissioner James O’Neill later said there might be more packages that have yet to be delivered, and encouraged the public to take caution.

10:43 AM PT — Sayoc was arrested in 2002 for threatening to blow up Florida Power & Light utilities company and said, “It would be worse than September 11th” … according to Miami PD records. He also threatened to harm the employee who was on the phone if they cut off his electricity.

He was charged with phone bomb threats, and eventually sentenced to one year probation.

10:35 AM PT — Sayoc was in handcuffs as heavily armed law enforcement officers took him into custody. 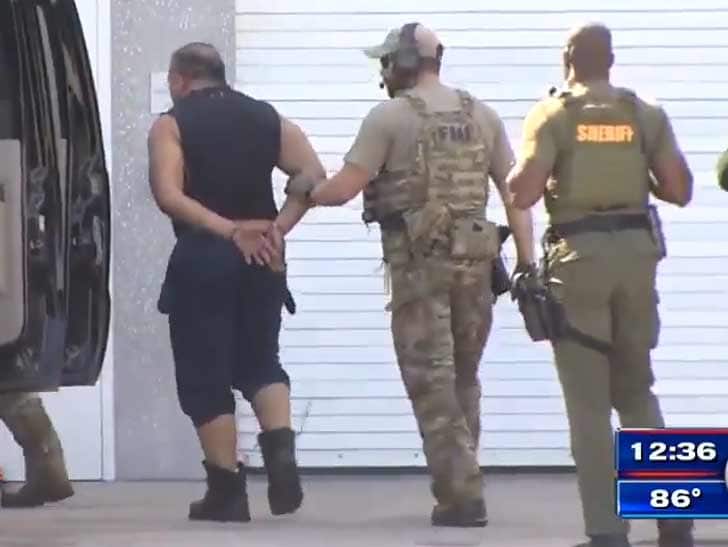 Also, Chippendales tells us Sayoc was working for a knockoff company … not the real Chippendales.

9:05 AM PT — Our law enforcement sources confirm the suspect’s name is Cesar A. Sayoc, a 56-year-old from Aventura, FL … and he has an extensive criminal history.

We found this image of him wearing a MAGA hat from 2016. We know he attended at least one Trump rally that year. 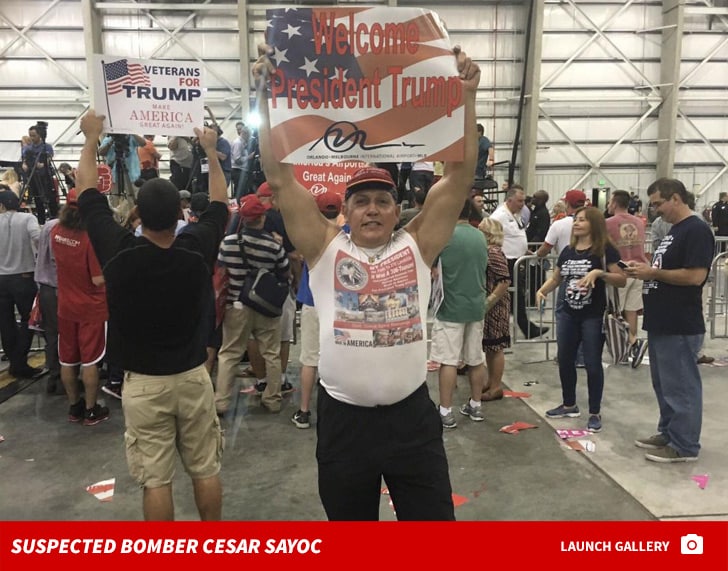 In 2014, Sayoc was on probation for battery and grand theft, and requested permission to travel due to his job as a road manager for Chippendales, International Gold Productions and Cesar Palace Royale Burlesque Show.

8:45 AM PT — President Trump just addressed the crowd about the arrest of the suspect.

This close-up image of one side of the van shows images with crosshairs over Hillary Clinton, Michael Moore, CNN’s Van Jones … and many more. There are also several positive images of the President and VP Mike Pence. 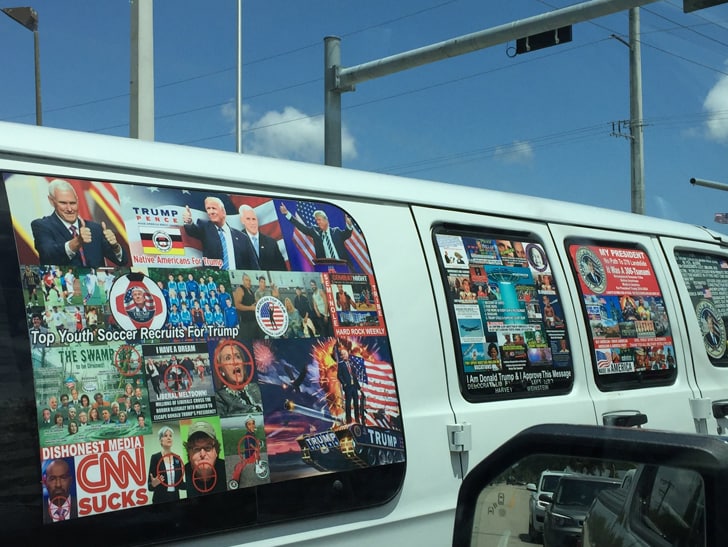 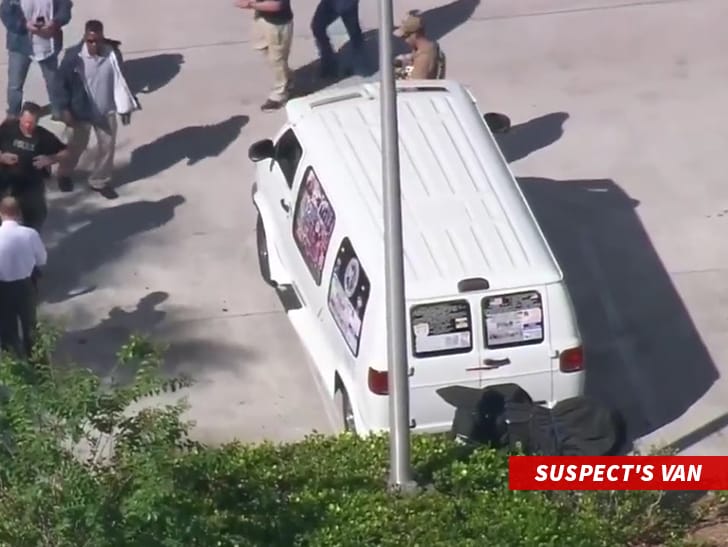 Federal authorities have nabbed a suspect for the rash of explosive devices sent this week to President Trump’s political foes … TMZ has confirmed.

The man was arrested Friday morning in Plantation, FL … and law enforcement swarmed around a vehicle believed to belong to the suspect. The van is covered with political stickers … including images of the President.

Cops had been zeroing in on a postal facility in Opa-locka — just south of Plantation — which they believe the suspect used to ship several of the suspicious packages. The most recent device found there was addressed to New Jersey Senator Cory Booker. 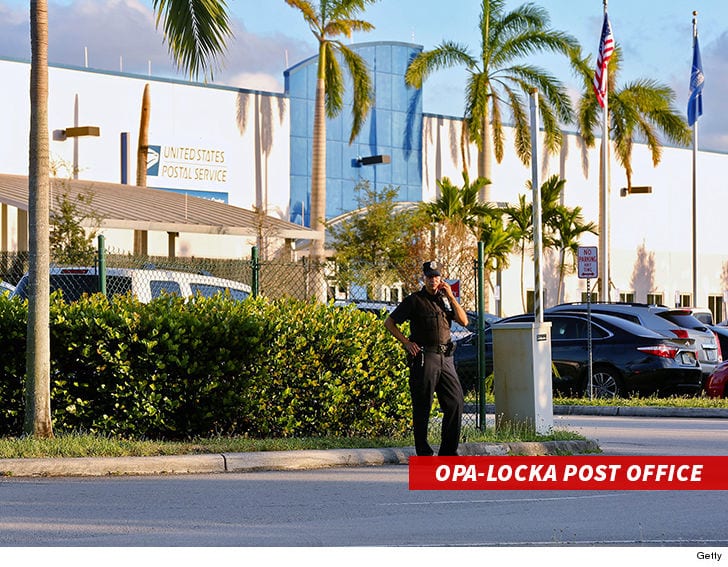 The wave of packages started arriving on Monday with one sent to liberal philanthropist George Soros … and then on Wednesday … packages intended for Bill and Hillary Clinton and the Obamas were intercepted. 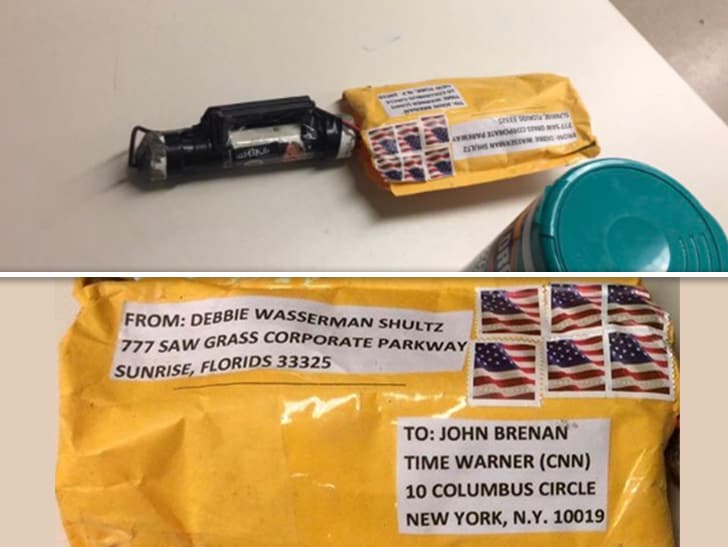 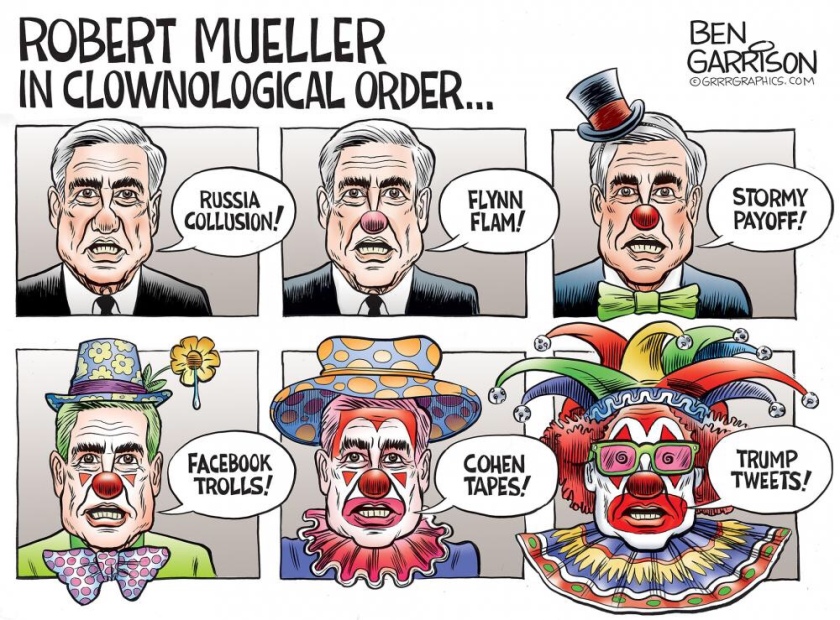 The whole thing was based on a fictitious dossier purchased by Hillary and the DNC to smear our president with the hope it would lead to his removal from office. Today the president tweeted out this statement:

..This is a terrible situation and Attorney General Jeff Sessions should stop this Rigged Witch Hunt right now, before it continues to stain our country any further. Bob Mueller is totally conflicted, and his 17 Angry Democrats that are doing his dirty work are a disgrace to USA!

President Trump is right. Sessions should wake up and end Mueller’s absurd investigation.

When the Deep State Plays Dirty- the bigger the Red Wave in 2018!

A group of 11 Republican lawmakers is asking the FBI and the Justice Department to investigate Hillary Clinton, James Comey, Loretta Lynch, as well as FBI agents and other top figures who feature in the Clinton email investigation.

‘Because we believe that those in positions of high authority should be treated the same as every other American, we want to be sure that the potential violations of law outlined below are vetted appropriately,’ according to the letter by Florida GOP Rep. Ron DeSantis and 10 other Republicans.

They complained about ‘dissimilar degrees of zealousness’ between how Clnton and President Trump were investigated, a reference to the Mueller probe. 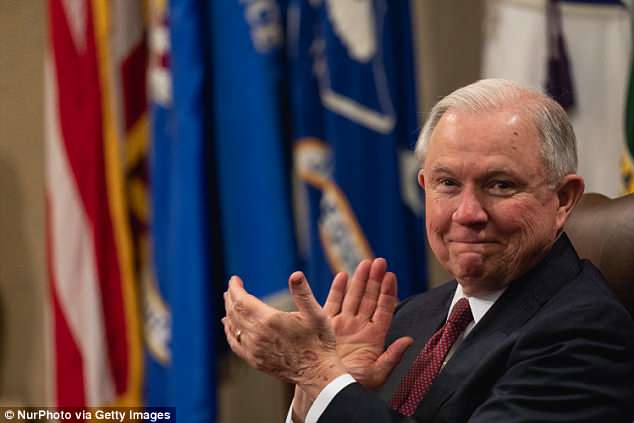 On Comey, who is in the midst of a book tour criticizing President Trump, the GOP lawmakers say he his actions suggest ‘improper investigative conduct, potentially motivated by a political agenda.’

On Clinton, they mention how her campaign lawyer made payments to the firm that hired Christopher Steele to produce the dossier of damaging information on Trump. Trump brought up the issue in his press conference Wednesday.

For former obama Attorney General Loretta Lynch, they cite the Uranium One deal. 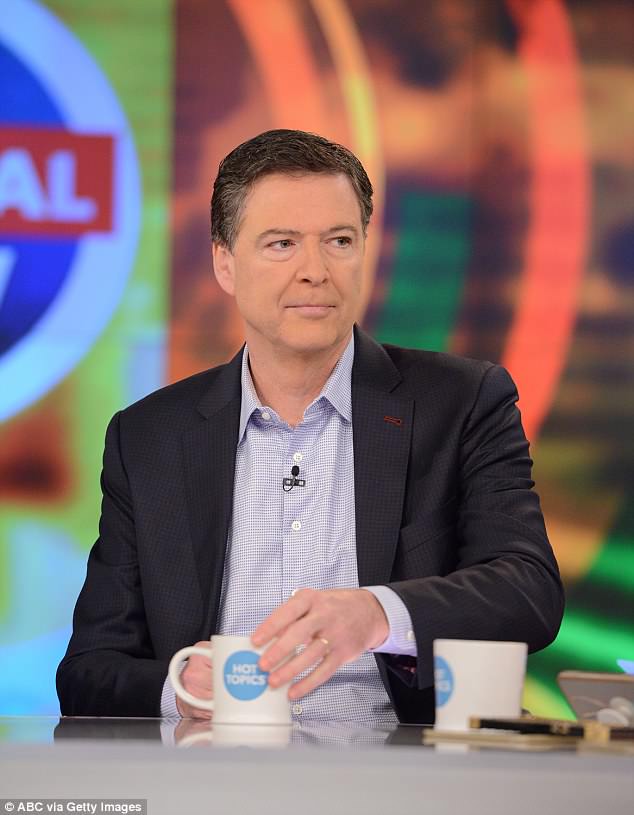 ON TOUR: They also called for an investigation of former FBI Director James Comey 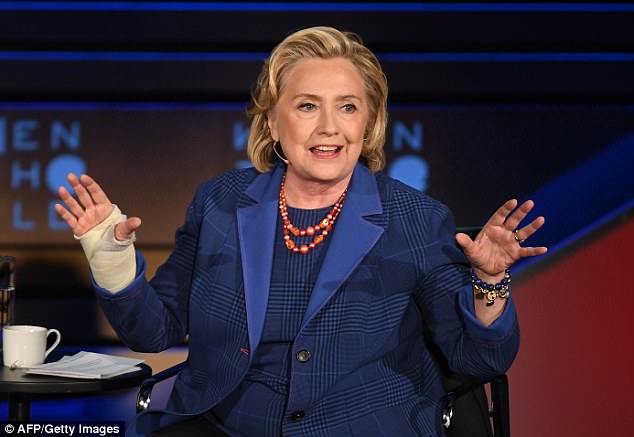 LOCK HER UP? The lawmakers urged an investigation of Hillary Clinton 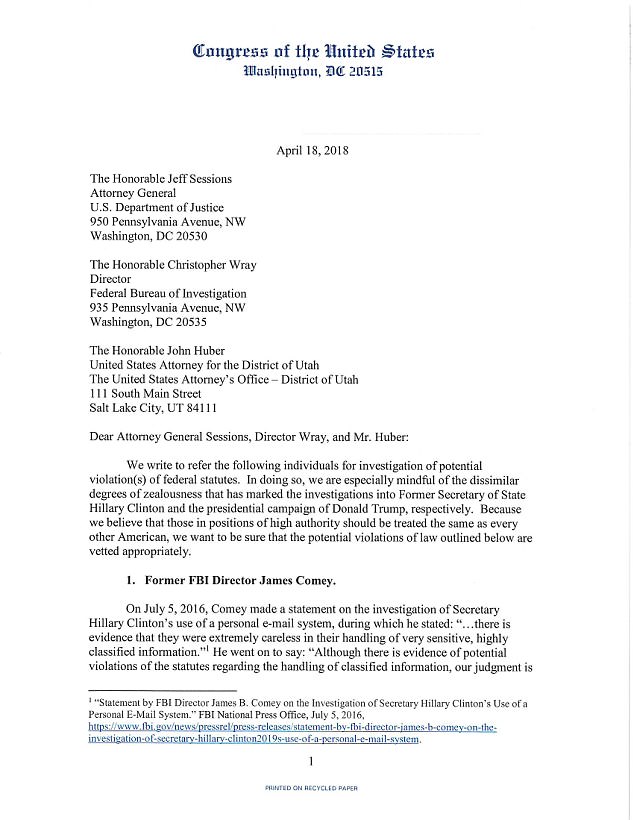 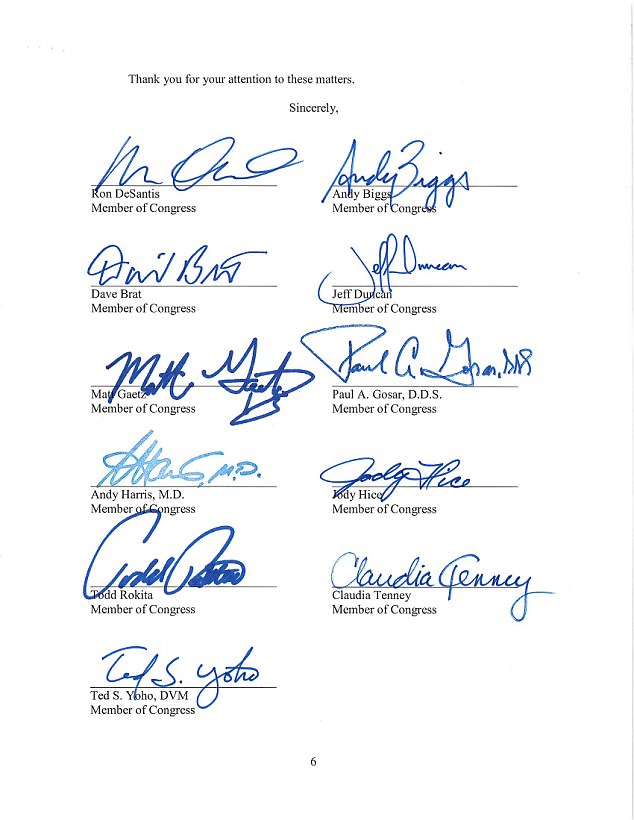 The criminal referral doesn’t have the force of law. Ordinary citizens also can urge investigations.

Several of the signers of the letter also pushed a second special counsel to investigate Clinton, the Hill reported.

The letter comes as former FBI director James Comey does interviews on a book tour, where he has repeatedly accused President Trump of acting like a mob boss, and urging him to life the ‘cloud’ of the Russia investigation.

Trump said at a press conference Wednesday: ‘There’s been nobody tougher on Russia than President Donald Trump.’