GREENVILLE, S.C. — A man who South Carolina authorities say wanted to enslave and eat a child has been sentenced to probation.

News outlets quote court records as saying 36-year-old Justin Teeter Bensing pleaded guilty to two counts of criminal solicitation of a minor and was sentenced Aug. 9 to 10 years in prison, but the sentence was suspended to five years of probation.

A sentencing sheet The Greenville News obtained from the Greenville County Clerk of Court’s Office says Bensing was diagnosed with autism and considered low risk. The judge said no prior criminal charges were also among the factors determining Bensing’s sentence.

Bensing had been accused of soliciting an undercover officer he thought was a girl. Bensing’s attorney James Brehm said Saturday that the cannibalism comments were Bensing joking with someone else and unrelated to the investigation.

ALBANY — Not leaving it to divine chance, the state Catholic Conference has turned in recent years to some of Albany’s most well-connected and influential lobby firms to help block a bill that would make it easier for child sex abuse victims to seek justice.

The Catholic Conference, headed by Timothy Cardinal Dolan, has used Wilson Elser Moskowitz Edelman & Dicker, Patricia Lynch & Associates, Hank Sheinkopf, and Mark Behan Communications to lobby against the Child Victims Act as well as for or against other measures.

All told, the conference spent more than $2.1 million on lobbying from 2007 through the end of 2015, state records show. That does not include the conference’s own internal lobbying team.

Filings show the lobbyists were retained, in part, to work on issues associated with “statute of limitations” and “timelines for commencing certain civil actions related to sex offenses.” Other issues included parochial school funding and investment tax credits.

“They are willing to spend limitless money in order to basically keep bad guys from being accountable for their actions,” said Melanie Blow, chief operations officer of the Stop Abuse Campaign. “I think they’re doing it because they don’t want to have to pay out settlements.”

Added Kathryn Robb, an advocate and survivor who says she was abused by her brother as a 9-year-old: “If they need to spend that much money on lobbying, clearly, then, they have some pretty big secrets to hide.”

While a far cry from the millions in lobbying top special interests spend in Albany each year, advocates for child sex abuse survivors say the $2.1 million spent likely represents a worthwhile investment to the Catholic Conference if it can continue to block legislation that would eliminate the statute of limitations on child sex abuse civil cases and open a one-year window to bring lawsuits for victims who can no longer sue under current law.

The Catholic Conference has argued that opening a one-year window to revive old cases could ultimately bankrupt the Church.

The firms the Catholic Conference chose is also telling.

Wilson Elser has long been Albany’s biggest lobbying firm. The firm represented the Catholic Conference from at least 2007 through the end of 2015 and was paid more than $1 million during that time, according to online filings with the state Joint Commission on Public Ethics.

After several key people either left the firm or reduced their responsibilities, the Church did not renew the contract with Wilson Elser for 2016, sources said.

Wilson Elser, which was being paid $10,000 a month by the Catholic Conference, had no comment.

In its place, state records show, the Catholic Conference hired another prominent firm, Greenberg Traurig, which it is paying $6,000-a-month. The lobbyist from the firm representing the Church is Michael Murphy, who used to be an assistant counsel for the Senate Republicans.

The Senate GOP opposes the one-year “lookback” window that Democrats are calling for.

The Catholic Church, some Orthodox Jewish groups, and other private entities oppose legislation by Assemblywoman Margaret Markey (D-Queens) and Sen. Brad Hoylman (D-Manhattan) that would eliminate the time limit that prohibits adults who were victimized as children from bringing civil cases after their 23rd birthdays.

Another top firm, Patricia Lynch & Associates, whose namesake had close ties to now disgraced Assembly Speaker Sheldon Silver, was hired by the Catholic Conference in 2009. Lynch’s firm for many years was ranked in the top 3 of well-paid lobbyists.

Lynch’s hiring by the Catholic Conference came after the Assembly passed different versions of the Child Victims Act four times from 2006 to 2008. The measure never came up again for a vote after Lynch was hired. 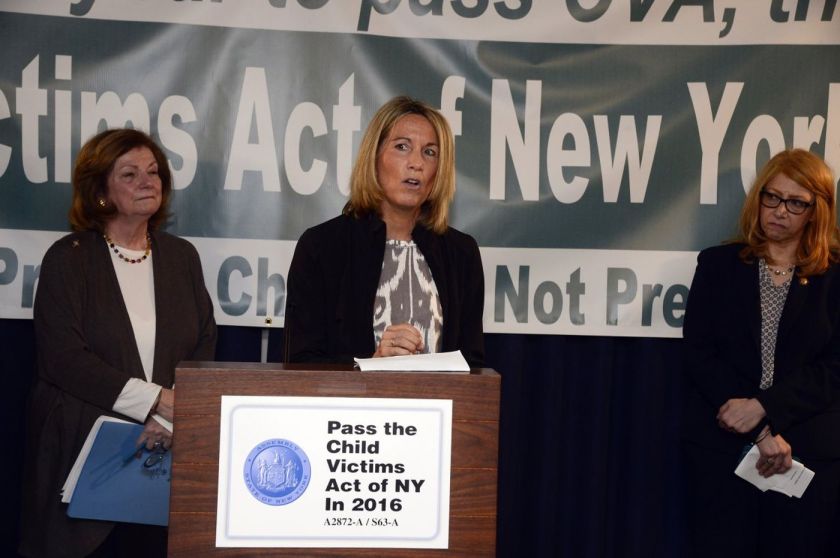 Kathryn Robb, who was abused as a child, said the Catholic Conference is hiding something if it has to spend big money on lobby firms. (Jefferson Siegel/New York Daily News)

“Once Ms. Lynch lobbied for the Catholic Conference, Mr. Silver’s support for our bill ended, and the bill did not come out of the Assembly’s Codes Committee … which as speaker, he controlled,” John Aretakis, a former lawyer and an advocate for victims of clergy sex abuse, wrote in a scathing letter recently to a judge handling Silver’s recent criminal sentencing.

State lobbying records show the firm’s contract with the Catholic Conference was terminated earlier this year, not long after Lynch was outed in court papers as having had an affair with Silver.

Silver was sentenced earlier this month to 12 years in prison after his conviction on federal corruption charges.

Lynch, whose firm was being paid $7,500-a-month, would only say her contract with the Catholic Conference was ended by “mutual consent.”

Sheinkopf, meanwhile, has had close ties with Gov. Cuomo, the former leadership of the Senate Democrats when they were in control of the chamber, and even the Senate Republicans.

Like the others who were hired by the Catholic Conference, he would not discuss the specifics about what he does for the $5,000-a-month he is being paid.

In an email, Catholic Conference spokesman Dennis Poust wouldn’t comment directly on his organization’s lobbying efforts. He also would not comment on the reasoning behind why specific lobbying firms were chosen.

“The Catholic Conference lobbies on many issues, from assisted suicide to farm worker rights to school choice to criminal justice reform,” Poust said.

He said the conference’s lobbying activity is in full compliance with the law and is reported, as required, to the state Joint Commission on Public Ethics.

“As such it is all a matter of public record,” Poust said. “We have no further comment beyond that.”