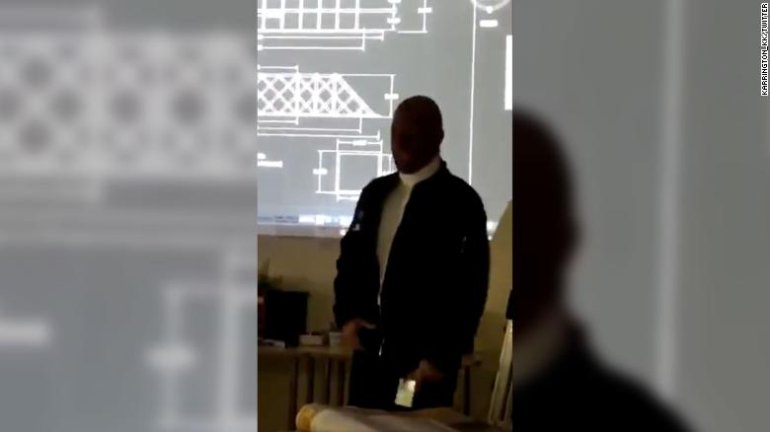 A high school teacher has been placed on administrative leave in California after he wore blackface to school on Halloween, according to the Milpitas Unified School District.

A high school teacher has been placed on administrative leave in California after he wore blackface to school on Halloween, according to the Milpitas Unified School District.

A video posted on social media shows the teacher with his face painted black and dressed up in an apparent attempt to imitate the rapper Common.

“Opportunities limitless, possibilities senseless, what will you do? Millions of people, not enough to eat, what will we do? With AI, Microsoft technology, the future is up to you, you can do it. With AI. The future will blow your mind,” the teacher says in the video.

Milpitas High School Principal Francis Rojas and MUSD Superintendent Cheryl Jordan said in a statement that the teacher, who has not been named, was suspended and now is under investigation for the “disparaging” act.

“In a school community where we welcome learners and families from over 50 languages who represent cultures and religions throughout the world, and where our long-standing neighborhood, Sunnyhills, was established as the first city in the nation for planned integration, it hurts to know that this type of cultural insensitivity and lack of cultural awareness still hovers in the background,” reads the statement.

Because the teacher has not been identified, CNN has been unable to reach out to him for comment.

Chris Norwood, the MUSD school board president, called the teacher’s actions “inappropriate, unprofessional and insensitive,” according to an online statement.

“As an African American man, the history of Blackface reminds me of the cruelty, hatred and fear my parents and people of African Ancestry have dealt with in the past and still experience today around the world,” Norwood said.

I gotta get rid of all the Gucci I have at home. I’m not supporting their brand anymore.

On Wednesday (Feb. 13), 50 posted a video on his Instagram page of himself setting a Gucci T-shirt on fire and almost burning himself in the process. At one point you can see the tee disintegrate into flames as 50 stands over a pile of old Gucci clothes that he has dumped from his closet.

“I gotta get rid of all the Gucci I have at home. I’m not supporting their brand anymore,” he wrote in the caption. 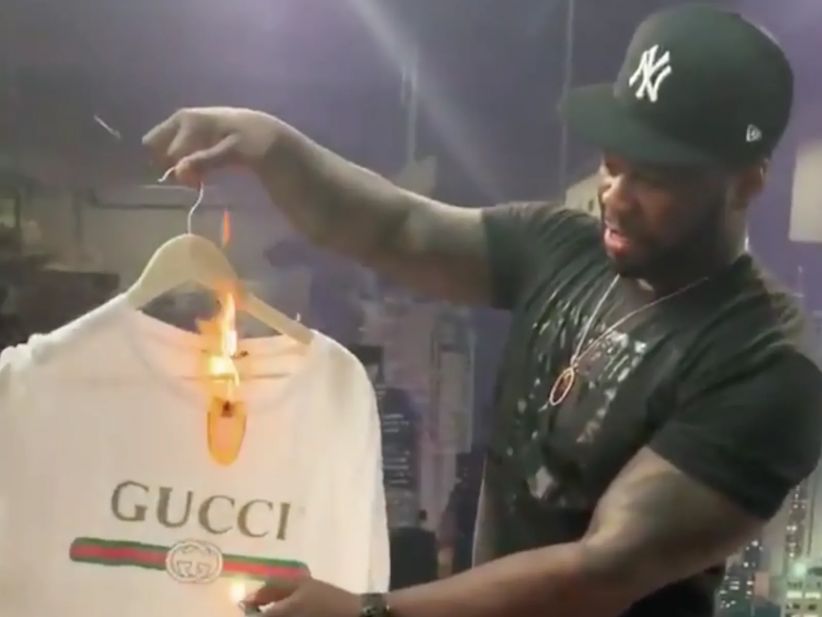 Before his Gucci clothing bonfire, 50 Cent wrote on his IG that he was done with Gucci and is donating his wares to the needy. “Yeah I’m gonna pass on Gucci, I’m giving all mine to the homeless so the right demo can wear it,” he wrote.

50’s Gucci burning also comes after he slammed his good friend and boxing icon Floyd Mayweather, Jr., The boxing legend recently told TMZ that he doesn’t care about the boycott and that he will continue to buy from Gucci despite calls from T.I., Spike Lee and others to stop supporting the brand. In response, the Power creator went on his IG page and posted a photo of Floyd wearing the Gucci sweater in all of its Blackface glory.

For those who don’t know, Gucci was called out for their wool balaclava jumper, which closely resembles a person in Blackface. The fashion house has issued an apology for the offending item, but the damage was already done. Several rappers including T.I., Soulja Boy and Q-Tip are boycotting the fashion brand.

“@gucci As a 7 figure/yr customer & long time supporter of your brand I must say…Y’all GOT US fucked UP!!” wrote Q-Tip on his IG page. “APOLOGY NOT ACCEPTED!!!! We ain’t going for this “oops my bad I didn’t mean to be racist and disrespectful towards your people” shit!!!” 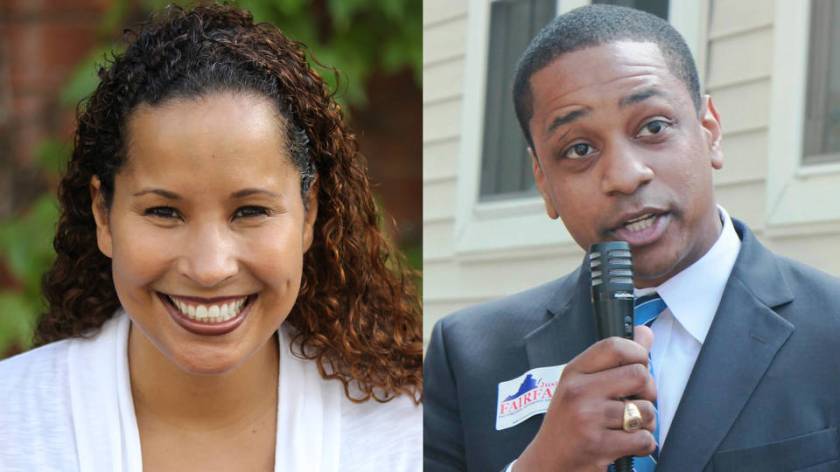 Tyson released her statement through her lawyers on Wednesday, days after Fairfax initially went public calling the accusations “totally fabricated.”

Tyson said she came forward February 1, after she learned Fairfax might become Governor of Virginia as a result of Governor Northam’s blackface yearbook photo page.

“This news flooded me with painful memories, bringing back feelings of grief, shame, and anger that stemmed from an incident with Mr. Fairfax that occurred in July 2004 during the Democratic National Convention in Boston,” Dr. Tyson’s statement read.

She explained the two met July 26, 2004, and crossed paths several times during the convention. She described their interactions as “cordial, but not flirtatious.”

“On the afternoon of the third day of the Convention, July 28, 2004, Mr. Fairfax suggested that I get some fresh air by accompanying him on a quick errand to retrieve documents from his room in a nearby hotel. Given our interactions up to that time, I had no reason to feel threatened and agreed to walk with him to his hotel,” she said. “I stood in the entryway of the room and after he located the documents, he walked over and kissed me. Although surprised by his advance, it was not unwelcome and I kissed him back. He then took my hand and pulled me towards the bed. I was fully clothed in a pantsuit and had no intention of taking my clothes off or engaging in sexual activity.”

She said the consensual kissing “quickly turned into a sexual assault.”

“Mr. Fairfax put his hand behind my neck and forcefully pushed my head towards his crotch. Only then did I realize that he had unbuckled his belt, unzipped his pants, and taken out his penis. He then forced his penis into my mouth. Utterly shocked and terrified, I tried to move my head away, but could not because his hand was holding down my neck and he was much stronger than me,” she said.

“As I cried and gagged, Mr. Fairfax forced me to perform oral sex on him. I cannot believe, given my obvious distress, that Mr. Fairfax thought this forced sexual act was consensual. To be very clear, I did not want to engage in oral sex with Mr. Fairfax and I never gave any form of consent. Quite the opposite. I consciously avoided Mr. Fairfax for the remainder of the Convention and I never spoke to him again.”

In a statement released hours before Tyson’s account went public, Fairfax said he wanted her treated with respect by the media and the public, but “I cannot agree with a description of events that I know is not true.”

He said at no time during the sexual encounter did Tyson express discomfort or concern and added she raised no concerns to him as they kept in touch in the months that followed.

“After the assault, I suffered from both deep humiliation and shame,” Tyson’s statement continued. “I did not speak about it for years. I (like most survivors) suppressed those memories and emotions as a necessary means to continue my studies, and to pursue my goal of building a successful career as an academic.”

Tyson said she went on to earn her Ph.D. and become a tenured professor.

Tyson said she first told friends about the alleged sexual assault in October 2017 ahead of Fairfax’s Lt. Governor election, which he went on to win.

“Years later, in October of 2017, I saw a picture of Mr. Fairfax accompanying an article in The Root about his campaign for Lt. Governor in Virginia. The image hit me like a ton of bricks, triggering buried traumatic memories and the feelings of humiliation I’d felt so intensely back in 2004,” she said. “Prior to reading the article. I had not followed Mr. Fairfax’s career and did not know that he was seeking public office. Unsure of what to do, I felt it was crucial to tell close friends of mine in Virginia, who were voters, about the assault.”

“I have never wavered in my account because I am telling the truth,” Tyson added.

Tyson said it has been extremely difficult to relive the traumatic experience but felt compelled to set the record straight.

“I have no political motive. My only motive in speaking now is to refute Mr. Fairfax’s falsehoods and aspersions of my character, and to provide what I believe is important information for Virginians to have as they make critical decisions that involve Mr. Fairfax.”

Earlier this week, Fairfax revealed that the Washington Post had investigated the claim last year and, in his words, opted not to publish due to “the absence of any evidence corroborating the allegation, significant red flags, and inconsistencies within the allegation.”

The Post disputed Fairfax’s statement, but stated the woman and Fairfax told different stories about what happened, and reporters could not corroborate either version so they did not run a story.

A decision that Tyson says made her feel “powerless, frustrated, and completely drained.”

“Again, I tried to bury memories of this painful incident and focus on my work and my students, wrote Tyson in the statement.

Fairfax made no additional comments about the Tyson statement when asked Wednesday at the Virginia State Capitol. However, he released the following statement just after 5 p.m.

As I said in my statement this morning, I have nothing to hide.

Any review of the circumstances would support my account, because it is the truth. I take this situation very seriously and continue to believe Dr. Tyson should be treated with respect. But, I cannot agree to a description of events that simply is not true.

I support the aims of the MeToo movement and I believe that people should always be heard and the truth should be sought. I wish Dr. Tyson the best as I do our Commonwealth.

This is a developing story.