“We recruited both, Republicans and Democrats, but that’s not good enough. We want to rule the White House,” the Qataris allegedly said.

Rep. Ilhan Omar (D-MN) participates in a news conference outside the U.S. Capitol in Washington, US, April 10, 2019

Yesterday, the Jerusalem Post reported on court testimony given by Canadian businessman Alan Bender in the trial of Sheikh Khalid bin Hamad al-Thani, who stands accused of ordering his American bodyguard to murder two people.

Bender told the court that Omar had been recruited by Qatar and had also pledged allegiance to Turkey’s President Erdogan. Speaking to the Post earlier today, Bender confirmed that the report was an accurate representation of what was said in court.

– That, according to Bender, Qatar aimed to ‘take down’ Imam Tawhidi, known as the Imam of Peace, for his criticism of Omar, using their contacts in American newspapers to write smear stories that would lead to legal charges against the Imam.

– That Qatar’s alleged assets include politicians on both sides of the House, and journalists.

– And that Senior Advisor to the President of the United States Jared Kushner is also alleged to have taken money from Qatar.

In testimony given in the Florida court, a copy of which was sent to the Jerusalem Post, in which Bender said of Omar:

“They called her Sister Ilhan, which is a term you only use when you’re a member of the Muslim Brotherhood. So Abdullah al-Athbah, he refers to Ilhan Omar as Sister Ilhan, and Sister Linda, which is Linda Sarsour, another activist who is now going to run for Senate.

“Somebody recommended her to the Qataris. They had several names, several options to pick from, to appoint – ‘they call her winning the elections is an appointment.'”

Omar was chosen, Bender said, because her father had a history of carrying out “very violent interrogations,” as a high ranking officer in the Somalian army,” and they thought that would be very suitable because the more dirt you have on your candidate, the easier it is to control the candidate.”

She also had other perceived weaknesses. Bender said he questioned why a devout Muslim such as Omar would take bribes, only to be told, “don’t be fooled by her head scarf. She’s a sex maniac, and she’s very weak when it comes to money and sex. And we got both.”

The claims are being supported by London-based Kuwaiti activist Abdullah al-Saleh, who on Tuesday evening tweeted: “My name is Dr. Abdullah al-Saleh and I was the guest of the Qatari government and Prime Minister for 6 months. I learned of their operations in the West and can testify and confirm that everything Alan Bender said in his deposition regarding Rep. Ilhan Omar and Qatar is true.”

Mr al-Saleh, who has a following of 123,000 people on Twitter, sent the Posta photograph of himself posing with members of the Qatari royal family to support his claim.

Indeed, so “obedient” was Omar, according to Bender, that the Qataris “wanted to make sure that nobody can go after her reputation… and that’s how they brought up the name of Imam Tawhidi… A social activist who was exposing a lot of that.”

The Qataris, Bender said, asked “if I could arrange for a lawsuit against Tawhidi that it will allow Ilhan Omar to capitalize on and sue him for defamation of character.

“Their plan was to drum up information about Imam Tawhidi that are not true … and then turn it into a media report in one of the prominent newspapers in the US. And then that turns into a possible lawsuit, which they asked me if I’m willing to sponsor the legal action part.”

The Government of Qatar hired a NY based lawyer to demand that Twitter delete my tweets and suspend me for exposing their dirty deals in Congress and the mainstream media.

The following is my/my lawyer’s response to Twitter, read for yourselves and see how dodgy Qatar operates. 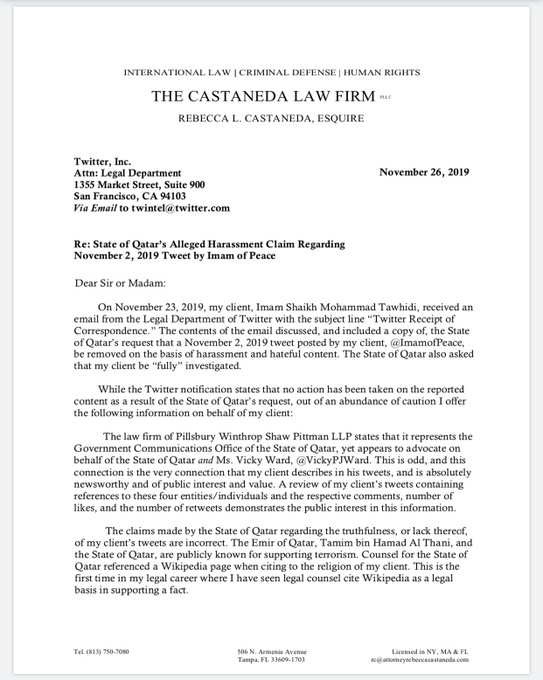 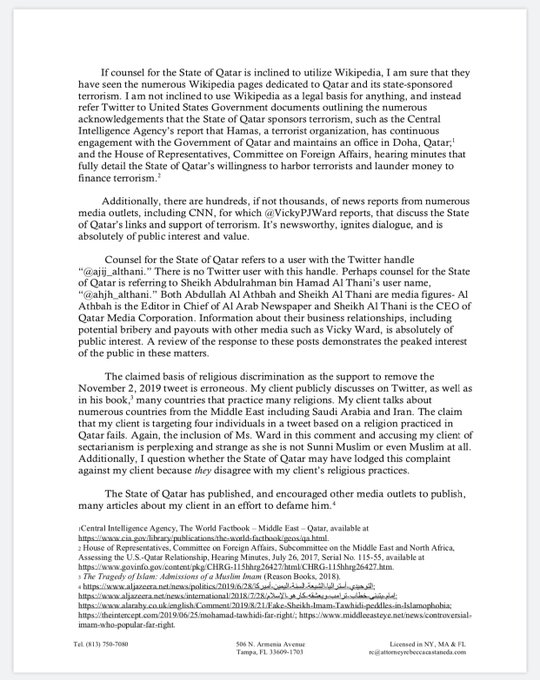 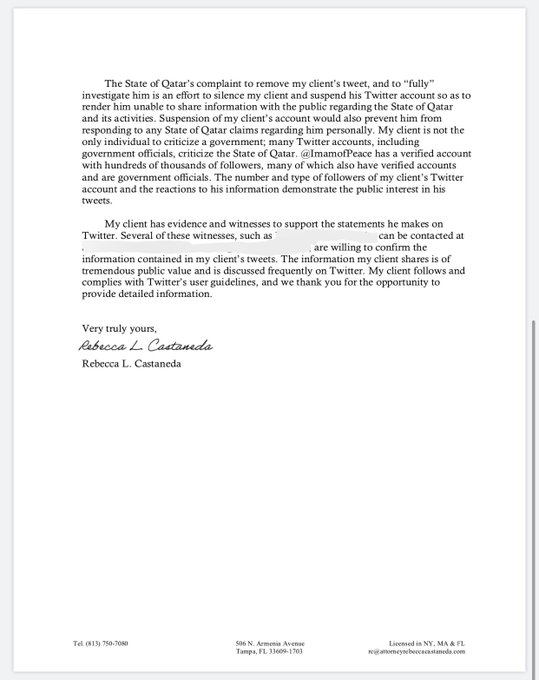 However, Omar was not the only prominent American named in the Bender testimony.

“They [the Qataris] said: ‘We recruited both, Republicans and Democrats, but that’s not good enough. We want to rule the White House.’ So they will,” he told the court.

Indeed, if Bender’s testimony is accurate, they are already close.

Explaining that Qatar uses western companies to effectively launder money they paid to American citizens, Bender cited a $1.4 billion payment which he claims was passed to Jared Kushner from Qatar, via a Canadian company named Brookfield, which they have invested heavily in.

Despite knowing that it was a failing investment, Qatar leaned on Brookfield to buy 666 Fifth Avenue from Kushner, to write off his debts.

“Why didn’t they pay Kusher directly?” the lawyer for the plaintiffs, Ms. Castenda, asked.

“Jared Kushner approached the government of Qatar for a bailout of 666 Fifth Avenue?” Castenda clarified.

“Correct. That’s what they told me. … And they did it. And Kushner is happy with them because, according to them, I don’t know Kushner personally, but the Qataris said Kushner told them: ‘Choose one of two. You pay what I tell you to pay, or I unleash my dogs.'”

“The dogs being who?” she asked.

The Qataris were aware that as an investment the pay-off was a write-off, but told Bender, “‘We just paid it to pay off his debt. And as long as he’s in the White House, we have to do what he wants until we control the White House.’ We as in Qatar,” Bender clarified.

The Jerusalem Post has reached out to Mr Kushner’s office for a response. However, no comment has been received as of yet.

Among other claims made by Mr. Bender were that:

– The real power in Qatar is Mohammed Al-Masnad, known as ‘the CEO.’ “After a couple of hours, I was convinced that the Emir of Qatar does not run the show and Mohammed Al-Masnad is in charge of everything. He is also the Emir’s uncle. […] And the Emir’s mother is the real king of Qatar.”

– The second most powerful man in Qatar is a Palestinian, Azmi Bishara.

– That Jamal Khashoggi was set up by Qatar to be killed by the Saudis after he was found to have been “playing both sides.” “Jamal Khashoggi and Prince Al-Waleed bin Talal were very close friends,” Bender said. “[Khashoggi] would receive sensitive secrets … and he leaks them to the Qataris. The Qataris would leak them to media outlets … and he was a member of the Muslim Brotherhood. I got that confirmation from the Qatari officials.”

– His Qatari contacts claimed that “they [Qatar] finance almost 99 percent of Saudi dissidents in the US and the UK. They pay them.” Bender named Ghanem al-Dosari, a well known YouTuber, as one such individual.

– Three Italians, known as ‘the engineers’ were paid by Qatar to hack the accounts of Saudi Arabian and the United Arab Emirates’s citizens. “E-mails, text messages, regular phone calls, laptops. Anything you can think of. They hacked into all that.”
– American officials are the cheapest to recruit. “British officials, they demand millions to be recruited. American politicians, some of them accept $50,000.”

– The Qataris refer to Trump as “the orange man,” and to Kushner as the “descendant of pigs and apes,” because he is Jewish. “And they refer to other American Senators and Congressmen who are Christians as ‘Crusaders’.”