The Austin Independent School District (ISD) school board voted in favor of a sex ed curriculum early Tuesday morning that normalizes LGBT sex acts at young ages and advises the words “mom” and “dad” be eliminated from school terminology.

The school board approved the sex ed curriculum that will be used to teach children in grades three through eight, despite the wishes of many outraged parents and faith-based groups who packed the meeting during which the vote occurred.

As the Statesman reported, outside the meeting, Naomi Wilson chanted in front of parents and pro-family supporters, “Black trans lives matter.” Wilson was arrested and charged with trespassing.

LIVE at Austin ISD opposing radical sex education; leftists try to shut down and take over our press conference. But they did not prevail. Watch and see how it turned out.

David Walls, vice president of Texas Values and an Austin ISD parent, said in a statement the board’s vote “sends a clear message: people of faith and traditional moral values are not welcome in Austin ISD.”

“By passing this curriculum, Austin ISD has broken the sacred trust that parents put in their children’s schools,” Walls continued. “Austin ISD parents have no reason to entrust their children to a school district that weaponizes education to indoctrinate children into the LGBT political movement.”

The AISD school board is allowing parents to OPT OUT, rather than OPT IN, a procedure which means the children of parents who are not vigilant about signing the OPT OUT form will be automatically included in the curriculum.

You can’t make this up folks, AISD swapped out Planned Parenthood’s sex ed for radical LGBT pro abortion Canadian sex ed. It’s so crazy not even we could believe it at first, but check the link for screenshots!https://txvalues.org/2019/09/24/planned-parenthood-sex-ed-not-radical-enough-aisd-proposes-canadian-curriculum-to-indoctrinate-children/ … #TXlege

Despite continued opposition from parents and concerned citizens, Austin ISD is still pushing forward with radical sex-education curriculum designed to indoctrinate children, as young as the third…

The family values organization said the “revised” curriculum “is just as radical and inappropriate as Planned Parenthood’s,” and continued:

In fact, despite AISD’s claim to have developed this curriculum “internally,” most of the curriculum seems to come from Canadian pro-LGBT abortion providers. Make no mistake, AISD’s revised curriculum shares the same legal (and moral) concerns as Planned Parenthood’s Get Real.

In the curriculum materials for grades three to five that were shared by Texas Values and PJ Media, teachers are instructed to “use Gender Inclusive Language,” and advised further:

It is important to avoid terms which refer only to ‘male’ and ‘female’ identities when speaking with young children as this can limit their understanding of gender into binaries and can exclude children who may not identify within these identities. For example, when discussing family members or adults they may have in their life, try not to only use terms like “mom” or “dad.” Try integrating words like, “parents” or, “guardians” to include children whose parents might not fit into “traditional” concepts of family structures. 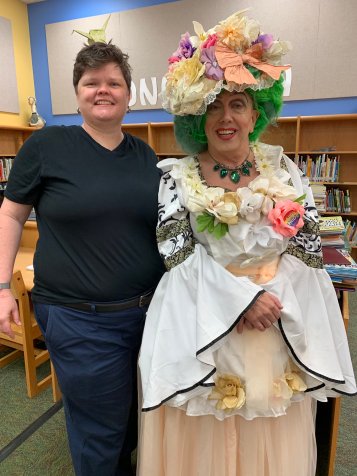 In a search of Richardson’s background in August, pro-family organization Austin MassResistance found Richardson had been arrested and convicted of prostitution in 1996.

In the grade 6 curriculum, students will be taught to “differentiate between gender identity, gender expression, and sexual orientation.”

In the section on “homophobia,” teachers are instructed to ask students “how gender can be thought of as a spectrum.”

“Explain that sexuality … is neither predictable nor linked to gender identity,” the program teaches. “While it is often assumed that boys like girls and girls like boys, these assumptions are harmful and exclude individuals who identify as lesbian, gay, bisexual, etc.”

In the curriculum, young children will be taught how to become activists for the LGBT agenda. Sixth graders, for example, will learn to “recognize injustices and plan ways to denounce inequality.”

Students will be taught they should not make “assumptions” such as “boys cannot wear dresses.”

More examples of the curriculum can be found at Texas Values. The pro-family group’s petition opposing the radical curriculum currently has over 7,600 signatures.