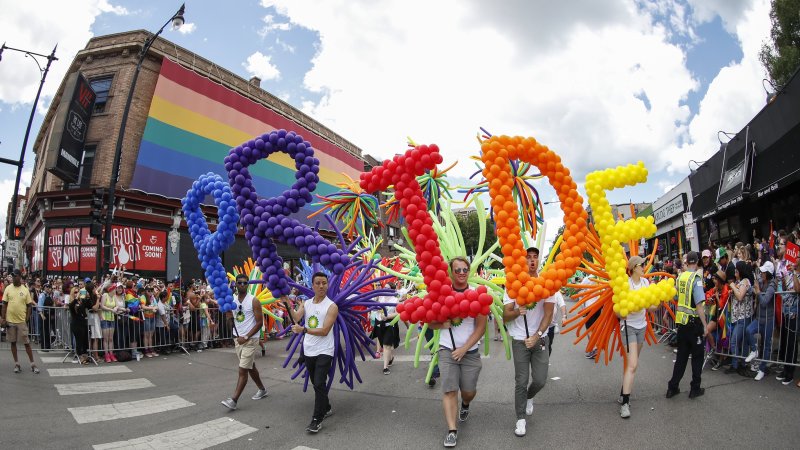 People celebrate the annual Pride Parade in 2017 in Chicago.

CHICAGO, Ill. — Illinois Gov. J.B. Pritzker signed into law on Friday a bill that ensures the contributions of LGBTQ people are taught in public schools.

House Bill 246 was introduced by Rep. Anna Moeller to amend the school code to add a more inclusive history curriculum.

“In public schools only, the teaching of history shall include a study of the roles and contributions of lesbian, gay, bisexual, and transgender people in the history of this country and this State,” the bill states.

Equality Illinois, the state’s largest LGBTQ civil rights advocacy organization, supported the bill and said the curriculum can have a “positive effect on students’ self-image and make their peers more accepting.”

The organization said some topics that will be added to the new curriculum include the nation’s first gay rights organization, the Society for Human Rights, being formed in 1924 in Chicago, and Sally Ride, the first US woman in space, who was a lesbian.

“One of the best ways to overcome intolerance is through education and exposure to different people and viewpoints,” State Sen. Heather Steans, who also sponsored the bill, said in a statement on her website earlier this year. “An inclusive curriculum will not only teach an accurate version of history but also promote acceptance of the LGBTQ community.”

The bill passed the Senate and House earlier this year and is scheduled to go into effect in July 2020.

The bill also states that all textbooks “authorized to be purchased must include the roles and contributions of all people protected under the Illinois Human Rights Act and must be non-discriminatory as to any of the characteristics under the Act.”

“It is my hope that teaching students about the valuable contributions LGBTQ individuals have made throughout history will create a safer environment with fewer incidents of harassment,” Steans said. “LGBTQ children and teenagers will also be able to gain new role models who share life experiences with them.”