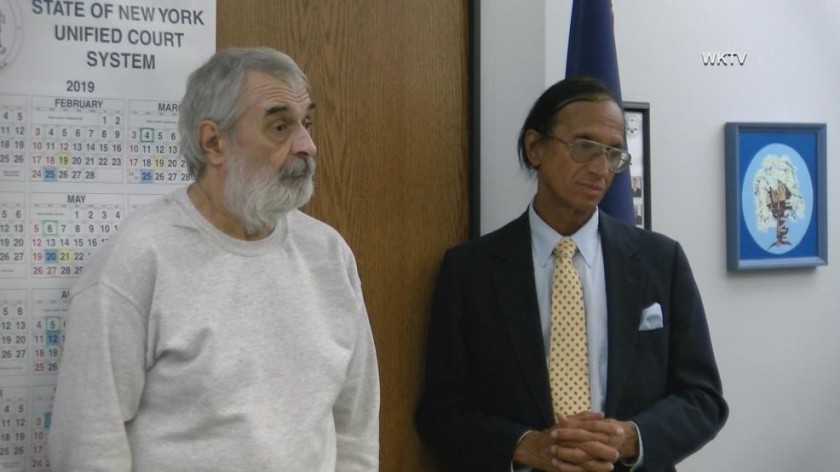 DEERFIELD, N.Y. — The Deerfield man who shot and killed two people in May after they broke into his home appeared in Deerfield Town Court Monday night, according to our news partners WKTV.

Ronald Stolarcyzk, 64, interrupted a burglary at his home in Deerfield, then shot and killed the two suspects with an illegally owned handgun, according to police

Police identified the two people killed as Patricia Anne Talerico, 57, of Utica and her nephew, Nicholas Talerico, 27 of Utica.

Stolarcyzk was charged with criminal possession of a weapon, with investigators saying he used his deceased father’s gun, which was never registered to Ronald Stolarcyzk.

Monday night, Judge Thomas Larkin dropped the charges against Stolarczyk and dismissed his case in the interest of justice, WKTV reported.

Stolarczyk’s attorney, Mark Wolber, has been asking since the beginning for the charges to be dropped.

“The district attorney’s office has been very agreeable with us and I believe they did the right thing,” Wolber told WKTV. “But this is what I thought was the right outcome from the beginning, given all the facts and circumstances of the case and I am very pleased and gratified that this is the result.”

Stolarczyk shared of few words of his own with WKTV.

“I was just in fear for my life and I had to act right away because I said hold it right there and they just kept coming and I realized if they were able to grab the gun from me I’d probably be dead,” Stolarczyk told WKTV. “I think its a very good outcome, I’m happy that all the charges were dropped.”

Stolarczyk is still not able to live in his home due to the condition of the structure, but he says he is safe where he is staying, according to WKTV.

A$AP Rocky is fresh out of jail and he’s got two things on his mind: God, and his ex Kendall Jenner.

The recently-released rapper got to spend time with both on Sunday (August 4) while attending Kanye West’s Sunday Service. A$AP showed his gratitude to the Man upstairs and Mr. West —who initially pushed for the 30-year-old rapper’s freedom, asking President Donald Trump to get him released from a Swedish jail — by showing up to the weekly gospel performance where he was filmed talking to Kendall.

The former couple was all smiles as they chatted alongside A$AP Ferg. As fans know, Kendall and A$AP go way back. The two quietly dated from 2016 to 2017. Despite not being spotted together since, nothing says “it’s time for a reunion” quiet like you ex’s brother-in-law helping to get your freedom.

A$AP’s Sunday service outing came just two days after his release from Swedish custody. The “Pups” rapper was held behind bars for nearly a month before a Swedish judge decided to release him from jail, pending the verdict in his assault case, which will be announced on August 14.

On Thursday (August 1), A$AP made an emotional plea to Swedish judges, asking for his freedom, TMZ reported. “I have spent a month in Sweden. This is my 5th or 6th time here. I have seen the most beautiful architecture. And the not-so-nice things … what I want is justice. I want my name to be cleared. Justice for all of us,” A$AP told the court. He later added, per the outlet’s report, that if he’s found not guilty, he doesn’t want money, he can earn that back. TMZ was the first to report that the Swedish Government “could be on the line to pay him millions for the time he’s spent locked up.”