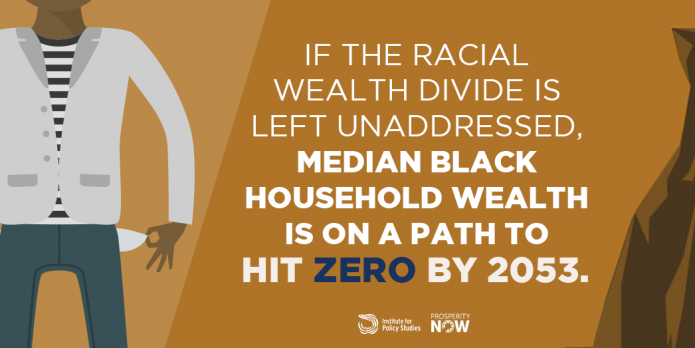 Income inequality has been getting worse, which suggests that the wealthiest, typically meaning Whites, are getting wealthier. According to a new study, the imbalance will shift so far that median Black and Latino households will lose the little relative wealth they have by about the time people of color form a majority of households in the U.S.

By 2053, Black households will have a median wealth of zero. It will take Latino households another 20 years to drop to the same level, according to an analysis by non-profits Prosperity Now (formerly CFED) and the Institute for Policy Studies.

As I’ve mentioned before, income inequality often captures attention, but wealth inequality is even more insidious.

That wealth becomes the head start in a race, like setting putting someone on the putative starting line and another, on the 90 meter mark in a 100-meter dash. By talking almost completely about income inequality, the country essentially pretends that a problem made over decades can be addressed on a single year’s scale. It can’t mathematically work.

Talking of wealth inequality in terms of a footrace is unfair. The race is over in a matter of seconds; only a few if someone is that far down the line. Wealth inequality lasts generations — forever, for all practical considerations.

One problem is that when wealth inequality increases much faster than the economy, the extra wealth has to come from somewhere. Someone loses it. I understand people don’t like hearing this, but it comes down to basic arithmetic. If the economy grows at 2%, for example, and someone’s share grows at 5%, the extra is something that otherwise would have gone to another.

The two factors — wealth transfer and the advantages wealth provides — come together in ugly ways. We typically describe middle class status in terms of income. But, if you change the definition to wealth, meaning you’d need between $68,000 and $204,000 in household wealth — middle quintile White households have nearly 8 times as much wealth as median Black households and 10 times as much as Latino households. Black and Latino families now have to earn two to three times as much as White families to catch up.

And then the time value of wealth comes into play:

These trends over time show the power of compound interest, whether positive or negative. Should the trends continue as they are, in absence of anything to reduce their power or even increase it, Black and Latino households will have nothing other than current income to call their own.

A number of practices contribute to and support these trends. One is the tax code. Many popular practices, like deductions for mortgage interest and lower taxes on capital gains, benefit Whites far more than Blacks and Latinos.

Another has been allowing predatory practices, like usurious interest rates by payday loan companies that make it difficult to impossible for people to get ahead. Again, these practices, focusing on the poor, have an outsized impact on Blacks and Latinos. The Consumer Financial Protection Bureau has begun to address these issues, but many want to kill off the agency.

Without programs specifically targeting people who don’t have wealth and need to build it, the country could become even more polarized by wealth inequality. Aside from its obvious inherent issues, such a direction could undermine the economy. If the median wealth of a majority of Americans is zero, there will be little to drive the economy as a whole, and that is a bad prospect for everyone.