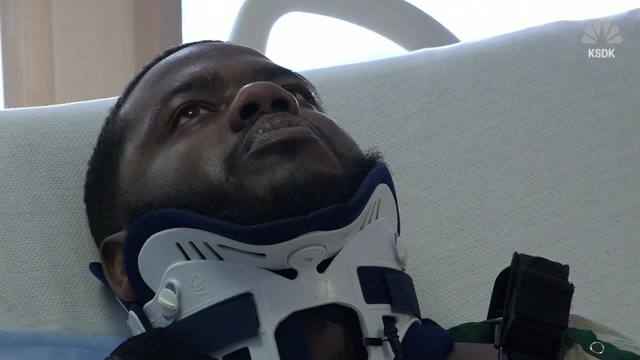 But now, the motor that raises and lowers his hospital bed is about the only way he can move.

“I’ll be paralyzed for the rest of my life,” Walker said from his bed in the intensive care unit at Saint Louis University Hospital.

Instead of life in a Level 1 Trauma Center, Walker was working as a personal trainer and as an Amazon delivery driver with a plan for his future.

“I wanted to go back to school and play college basketball, play with my son just like any other father would,” he said with his family beside his bed.

Tuesday, Walker said he had just finished his Amazon shift when he stopped in a St. Charles Target parking lot to help a fellow driver.

He admitted he parked in a disabled parking spot. What happened next, he and his family can’t understand.

Walker said Thomlison approached him and “asked me why the hell I parked in a handicapped spot and I told him, ‘I’m gonna move it,'” recalled Walker. “And he kept harassing me.”

Walker said Thomlison punched him and he fought back.

“When he pulled the gun out my eyes were just amazed. I tried to run in between two cars. He had a nice aim and hit me right in the spine,” said Walker.

Prosecutors said surveillance video shows Walker trying to run away when he was shot in the back. The bullet paralyzed him from the stomach area down.