Two decades ago, the editor of the tiny Democrat-Reporter newspaper in Linden, Ala., was being talked about as a potential contender for the Pulitzer Prize. A congressional citation read on the floor of the House of Representatives in 1998 lauded “his truly American heroism and dedication to the truth” and called him “one of Alabama’s finest and most ethical journalists.” Glowing profiles in the New York Times, People magazine and the American Journalism Review highlighted his tenacious reporting and down-home Southern charm.

Now, Goodloe Sutton is back in the news again — this time because he recently called for mass lynchings and suggested that the Ku Klux Klan should return to “clean out” Washington.

“Time for the Ku Klux Klan to night ride again,” began a Feb. 14 editorial in the paper, which went on to claim that Democrats, along with some Republicans, were planning to raise taxes in Alabama. It concluded, “Seems like the Klan would be welcome to raid the gated communities up there.”

Sutton, who is also the paper’s publisher, could not immediately be reached for comment. He told the Montgomery Advertiser on Monday that he had written the editorial, which ran without a byline, and stood by it.

“If we could get the Klan to go up there and clean out D.C., we’d all been better off,” he told the paper, explaining, “We’ll get the hemp ropes out, loop them over a tall limb and hang all of them.” 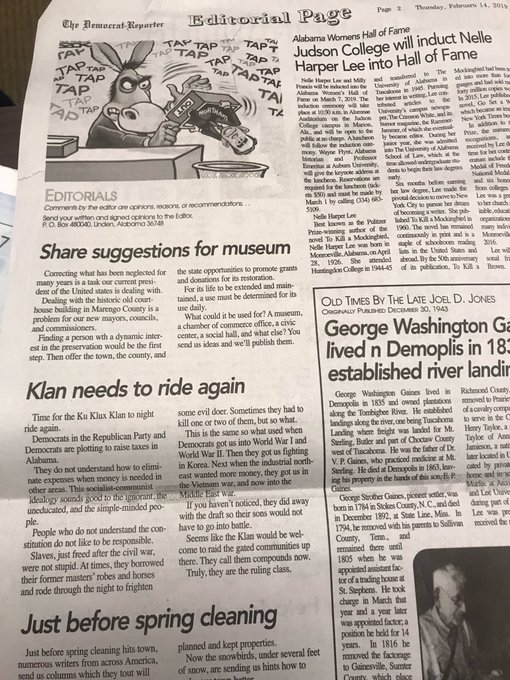 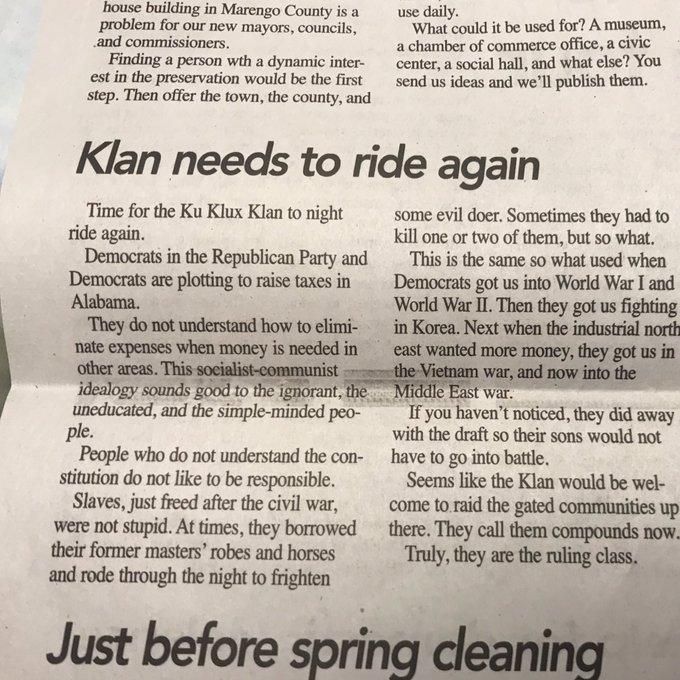 The Democrat-Reporter back at it again with things you’d never thought you’d see published anymore.

During the same conversation, Sutton argued that the KKK “didn’t kill but a few people” and “wasn’t violent until they needed to be,” the Advertiser reported on Monday. He further suggested the Klan, a white supremacist hate group, was comparable to the NAACP. Sutton also added that people could call him, write him a letter or boycott the paper if they disagreed with his views.

When the Advertiser’s Melissa Brown asked him whether it was appropriate for a newspaper publisher to suggest that Americans should be lynched, Sutton replied, “It’s not calling for the lynchings of Americans. These are socialist-communists we’re talking about. Do you know what socialism and communism is?”

The editorial — which, like the rest of the paper, was not published online — first started getting attention on Monday afternoon when two student-journalists at Auburn University posted photographs on Twitter. On Monday night, Sen. Doug Jones (D-Ala.), who prosecuted two members of the Klan for their role in the 1963 Birmingham church bombing that killed four young girls, called the editorial “disgusting” and demanded Sutton’s immediate resignation. “I have seen what happens when we stand by while people-especially those with influence- publish racist, hateful views,” he wrote.

Echoing the call for Sutton’s resignation was Rep. Terri A. Sewell (D-Ala.), who wrote, “For the millions of people of color who have been terrorized by white supremacy, this kind of ‘editorializing’ about lynching is not a joke — it is a threat.”

OMG! What rock did this guy crawl out from under? This editorial is absolutely disgusting & he should resign -NOW!

I have seen what happens when we stand by while people-especially those with influence- publish racist, hateful views.

2,925 people are talking about this

For the millions of people of color who have been terrorized by white supremacy, this kind of “editorializing” about lynching is not a joke – it is a threat. These comments are deeply offensive and inappropriate, especially in 2019. Mr. Sutton should apologize and resign.

138 people are talking about this

The criticism was a sharp contrast from 20 years ago, when Sutton was honored on the floor of Congress. “His story is a shining example of the best and the brightest which occurs in America when a single citizen has the bravery to stand alone, in the face of mounting pressure and odds, and stands up for justice and equality,” Rep. Earl F. Hilliard (D-Ala.), the first person of color to represent Alabama in Congress since Reconstruction, said in his May 1998 proclamation.

Back then, Sutton was being celebrated for his dogged investigative journalism in the southwestern Alabama city with less than 3,000 residents, which resulted in the local sheriff being sent to federal prison. He and his wife, Jean, who worked alongside him at the paper, had spent nearly four years publishing stories that showed that Marengo County Sheriff Roger Davis was siphoning off government funds, from cashing reimbursement checks that were meant to go to the sheriff’s office to buying an all-terrain vehicle for his daughter with a check from the department’s bank account.

That reporting led to an undercover investigation that put Davis and two of his seven deputies in jail, but it took a toll on “Miss Jean” and “Ole Goodloe,” as the Suttons were known in their rural community. “The stories triggered a backlash,” AJR reported. “One of the elders at the Presbyterian church Sutton attends told him to lay off the sheriff. Sutton says he began losing about $1,000 a week in advertising. And hate mail poured in.”

Talking to the Associated Press in 1998, Sutton said deputies had threatened to plant drugs in their home, and the couple and their oldest son had repeatedly been pulled over and harassed. Davis “started telling anyone who would listen that my oldest son was involved in drugs, my wife was having affairs and I was drunk all the time,” he said. He was finally vindicated in 1997, when Davis pleaded guilty to charges including extortion and soliciting bribes.

20 years ago, I worked a summer at the Democrat-Reporter. I’ve written good things about Goodloe Sutton Sr. in the past, so I feel obligated, and sickened, to share the bad. I can’t explain how anyone would write anything like this, except to have gone down a really dark path. 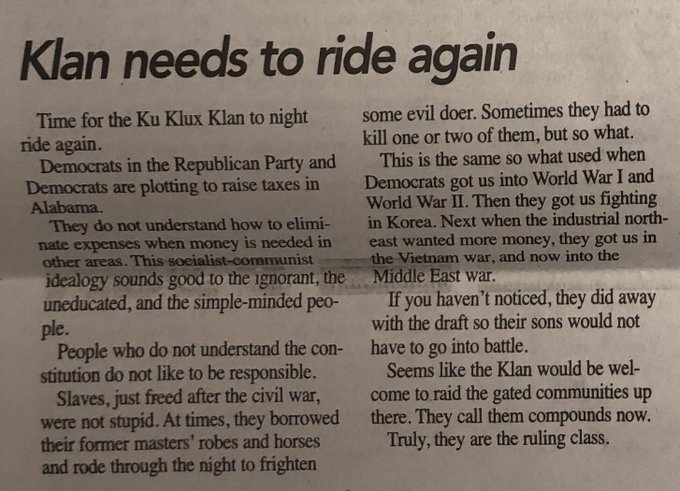 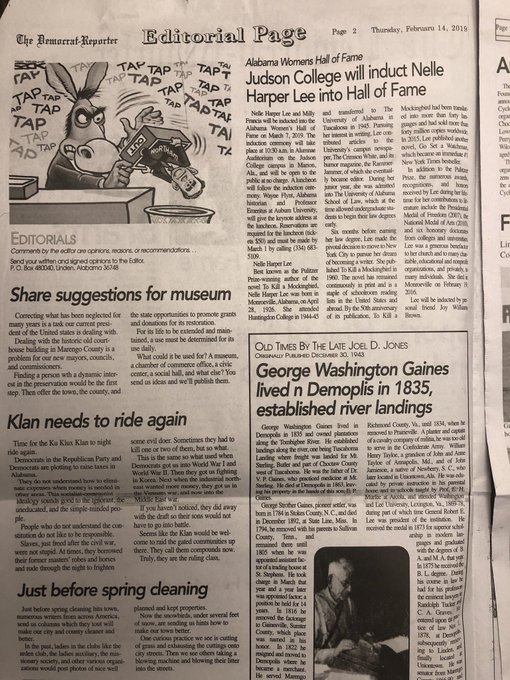 52 people are talking about this

That same year, two of Davis’s deputies, Wilmer “Sonny″ Breckenridge and Robert Pickens, were arrested along with 68 others in a massive drug bust that, at the time, was the largest in southern Alabama history. Breckenridge, AJR noted, had been the officer whose job was to visit schools and caution students about the dangers of using drugs. Both were ultimately convicted on charges that they had been abusing their positions as law enforcement officers by providing protection to drug dealers.

But by 2015, the Democrat-Reporter, like so many other small papers, was fighting for its life. Sutton had been forced to move out of the building across the street from the county courthouse where he had been based since 1965. “His office now is in a former barbecue restaurant a block away, where pieces of paper are taped to windows carrying the paper’s name,” the Advertiser reported. While the paper had more than 7,000 subscribers in 1998, circulation had fallen to roughly 3,000. Making matters worse, Jean, his managing editor and wife of 39 years, died in 2003 of complications from cancer.

“It was hard for me to go home during that time,” he told the Advertiser. “I was like a zombie for several years after I lost Jean. I didn’t know what to do.” Jean had been the one who first started digging into the rumors of corruption at the sheriff’s office, AJR reported, but since she hated to be in the spotlight, she refused to have her name appear on any of her stories and gave the credit to her editor husband instead.

The AJR profile — which showed Sutton fishing for crawfish and mentioned that Jean liked to bake chocolate chip cookies for the sheriff’s deputies — portrayed the couple as charming, small-town muckrakers. But at some point, the paper turned away from investigative journalism and began publishing more and more racist screeds. Sutton’s “racial references in headlines and stories” had upset many of his readers, the Advertiser acknowledged in 2015, noting that one front-page story about a murder described the perpetrators as “Selma black thugs.”

Asked what the headline might have said if the killers had been white, Sutton didn’t respond but appeared to wink at his interviewer.

This is a sad final chapter to Goodloe Sutton’s career, which had been marked by courageous reporting. At this point, someone needs to take the keys. https://www.montgomeryadvertiser.com/story/news/2019/02/18/alabama-newspaper-ku-klux-klan-to-night-ride-again-linden-democrat-reporter-goodloe-sutton/2910436002/ …

Goodloe Sutton, the longtime editor of the Democrat-Reporter newspaper, called for lynchings in a phone call with the Montgomery Advertiser.

41 people are talking about this

When Sutton’s comments on the Klan began getting attention on Monday, longtime readers pointed out that it wasn’t the first time that the paper’s editorial page had endorsed extreme or openly racist views. In May 2015, an editorial stated that the mayor of a city “up north” had “displayed her African heritage by not enforcing civilized law.” Another, published in June of that year, called for drug dealers, kidnappers, rapists, thieves, and murderers to be hung “on the courthouse lawn where the public can watch.”

“Dope heads know how to grow marijuana but not cotton,” one August 2014 editorial read. “They don’t pay sales taxes on what they grow so this doesn’t register with the economists who compile the statistics about jobs and employment. This market is dominated by blacks.” That same month, President Barack Obama was described by the paper as a “Kenyan orphan president” who was elected because Americans thought “it would be cool to have a colored man” in the White House. Later, amid the national controversy over football players kneeling during the national anthem, the Democrat-Reporter declared, “That’s what black folks were taught to do two hundred years ago, kneel before a white man.”

Other editorials have disparaged women with crude comments about their weight: Michelle Obama was labeled “a chubby chick” by the Democrat-Reporter, while Hillary Clinton was a “little fat oinker.” In January 2017, an editorial predicting that Clinton would be sent to prison stated, “Fat women are more stupid than trim women. Hillary wasn’t trim.”

Since the editorials are run without a byline, it’s unclear which, if any, were written by Sutton. Archived editions of the Democrat-Reporter from 2012 to 2017 indicate he was responsible for overseeing editorial content, and that the paper’s two or three other staff members were in charge of tasks like layout and production. A since-deleted post on a journalism forum indicates that as recently as December, Sutton had been trying to sell the paper, which he inherited from his father in the 1980s.

To some local lawmakers, the news that the Democrat-Reporter’s publisher was wishing for the return of the most notorious hate group in American history came as no surprise.

“That kind of ignorance is the reason I don’t even subscribe to the paper,” A.J. McCampbell, a Democratic state representative, told AL.com.