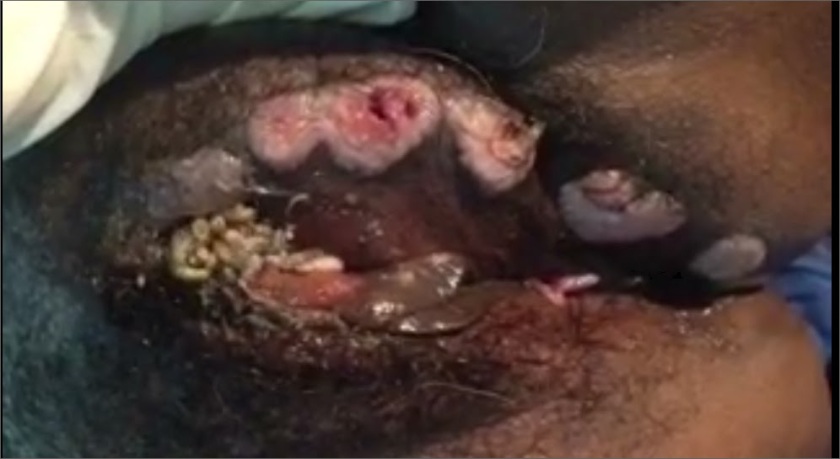 Update: In November 2014, another video of a maggot infestation in a woman’s genitals went viral. Many astute readers clued us in to some of the locations of this viral video, but after reviewing the websites, I declined to include an updated link because I found them to be pretty misogynistic and exploitative. The message remains the same, though — yes, it’s possible to get maggots in a vagina; no, it’s not directly caused by an STD; and no, it’s definitely not caused by a “superbug” strain of any STD. Continue reading to get the scoop on how maggots actually can infest genitals, and what we know about their connection to STDs.

Over the past couple of weeks, I’ve been confronted by two mysteries. The first was a collection of search terms that led curious Web surfers to our blog. Take a gander at them and see if you can tell why they raised my eyebrows:

There were dozens of similar searches leading to this blog, enough to make me take notice — and dig around.

Maggots infesting your genitals isn’t something you need to worry about.

First, the obvious: I Googled “STD maggots” and looked at what came up. While there was absolutely nothing to be found in the legitimate news media, there was a proliferation of recently published stories on websites that I’d never heard of, all containing the same unsourced viral video of someone removing maggots from someone else’s vagina. (Actually, I could only find stills — none of the websites I looked at had functioning video. Not that I was hugely motivated to find one that did.)

The accompanying articles described a female patient with a sexually transmitted disease (STD) said to be called “sex superbug,” an antibiotic-resistant bacteria, which caused maggots to grow in her vagina. While there is no STD formally called “sex superbug,” the original author was probably referring to antibiotic-resistant gonorrhea, which is caused by a strain of bacteria called Neisseria gonorrhoeae that has evolved resistance to the drugs we use to kill it. Someone would have to track down the video’s source, however, to confirm that the subject actually suffered from gonorrhea in addition to the infestation of maggots.

Second, the nerdy: I headed over to PubMed to see what I could find in the medical literature. A search for “gonorrhea maggots” yielded zero results, which was a strike against the legitimacy of the recent viral video. However, I did quickly learn that it is possible for maggots to infest a vagina — a condition that’s called myiasis of the vagina, which itself is not an STD. Of course, there were only a handful of articles about this condition, leading me to deduce that it is very rare indeed. Of the articles that did turn up, very few were about adult humans, and only three involved STDs or possible sexual activity.

The first article, which had an English abstract but Spanish text, was published in a Chilean medical journal in 2009, and described the case of a young woman who found maggots in her urine. Due to the patient’s “record of use of intravaginal vegetables as sexual stimulator,” the authors speculate that she introduced larvae into her body by repurposing a vegetable as a dildo. As far as I can tell, this is the only reported case of possible produce-induced intravaginal maggot infestation, but all the same, it might be a good idea to wash fruits and vegetables before using them as sex toys.

The second article (warning: graphic photos) was written by authors affiliated with the All India Institute of Medical Sciences and published in 2011. It describes the case of a woman with a large genital wart that was found to be infested with maggots, 20 of which were subsequently removed with forceps. Perhaps this is the source of the recent rumor about the “STD that causes maggots.”

The third article (warning: graphic photos) was published in 2002. This report comes from Brazil and details the cases of two teenage girls. The first patient had trichomoniasis, and more than 100 maggots were removed from a genital lesion. The second patient had genital warts as well as lesions that were found to be infested with around 65 maggots. The authors note that the patients had poor hygiene and speculate that flies were attracted to the odor and laid eggs in the genital area, where there were open sores.

Over the decades, there have been a few other scattered cases of vaginal maggot infestations published in the medical literature — occurring in patients with no reported STDs. It’s safe to say that this condition is very rare, and can occur in people with or without STDs. It’s also worth mentioning that there are many species of maggots, not all of which are capable of infesting human tissue.

According to the Centers for Disease Control and Prevention, myiasis is more common in tropical climates, and people with open wounds are at increased risk. Some STDs can cause open sores, which themselves can make a person more vulnerable to subsequent infections. For example, you might have heard that some STDs, like syphilis, trichomoniasis, and herpes, increase risk for HIV — this is because these STDs can cause open sores, which provide doorways for a virus’ easy entry. So, theoretically, open sores caused by STDs and other infections could create a home for maggots … But this possibility is so minuscule that it’s really not something you should worry about. Focus on safer sex practices, like using condoms and being screened for STDs with potential partners, but don’t fret about maggots!

Oh, one more thing. As I said at the top of the article, I’ve been confronted by two mysteries recently. The first was the connection between STDs and maggots. The answer to that is: not much of a connection at all, really, though in rare situations maggots can infest open wounds in the genital area. The second mystery is: How the heck did these search terms lead people to our blog? Prior to today, the word “maggot” has never appeared in any of our articles.

I’ll leave the mysterious machinations of Google’s algorithms to the computer experts.