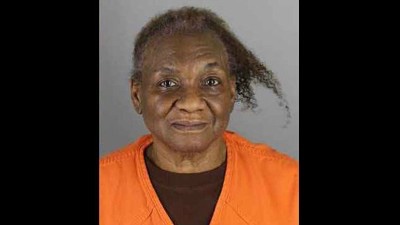 BROOKLYN CENTER, Minn. –  A Minnesota woman was arrested earlier this month after she shot her grandson for putting his cup of tea on her furniture, police said.

Helen Lenoir Washington, 75, of Brooklyn Center, is charged with assault and second-degree assault with a dangerous weapon, according to Hennepin County Jail records. Arrested Oct. 12, she was released on bond four days later.

Washington, who asked arresting officers where her bullet struck her grandson, told them she didn’t think she should go to jail, The Minneapolis Star Tribune reported.

The Star Tribune reported that Brooklyn Center patrol officers were called to Washington’s home Oct. 12, where they found her grandson in the front yard with a gunshot wound to his thigh. The grandson, whose name and age were not released, told the officers his grandmother shot him during an argument over a cup of tea.

According to the newspaper, a child at the scene corroborated the grandson’s story, telling officers that Washington had gotten upset because he put his cup of tea on the furniture after she’d told him not to. Washington dumped the grandson’s tea out and left the room to get a gun, the minor told investigators.

The grandson got another cup of tea and set it down once again on the furniture, the Star Tribune reported. Washington pulled out the .38 Special and shot him, police said.

KSTP in St. Paul reported that Washington told investigators she was angry because her grandson had put his cup on a wooden table.

Investigators found the revolver at the scene, the Star Tribune reported. It was loaded with five rounds, one of which had been spent.

A judge has ordered Washington to undergo a mental evaluation to see if she is competent to stand trial, the newspaper said.