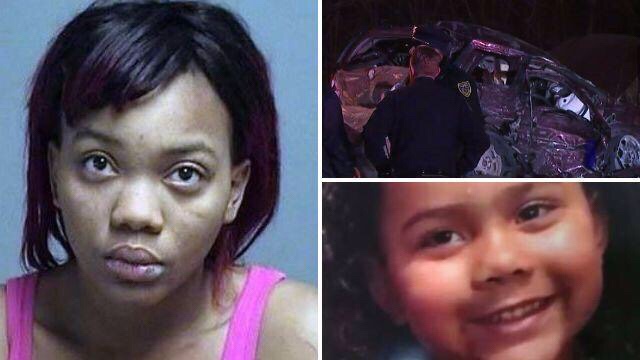 A mother got high on weed and cocaine before driving her car down the wrong side of a freeway and into a truck, killing her two young children, police say.

Kanosha Bason, 25, was also found with alcohol in her system after the February 23 crash that killed her son Noreyion, 7, and daughter Nia’Laisha, 5, as well as her brother Cedrick Lyons, 32, police say.

Lab tests subsequently showed that Bason was not legally over the limit that morning, but that she was likely impaired by what she had consumed.

The horror smash happened after she drove her SUV into oncoming traffic on an interstate connecter along Route 711 in Youngtown, Oh.

It saw her collide head-on with a tractor trailer that was hauling steel beams.

As a result of recent lab results, Bason was charged with vehicular homicide Monday, with US Marshals currently now trying to establish her current whereabouts.

Truck driver Gilbert Demello, who survived the impact told WKBN that Bason was driving at high speed when they collided.

He added: ‘I was going to walk down and the lady said, “There’s three babies, three babies on the ground, dead.”‘

Speaking about the charges, Youngstown City Law director Jeff Limbian said: ‘There were factors under both her urine screens and her blood screens that suggested that we should do it, charges in the alternative.’

This photo shows the extent of the damage done to Bason’s SUV following the head-on smash with the truck (Picture: WKBN)