WASHINGTON (AP) — Reality TV star Kim Kardashian West paid a visit to the White House Wednesday to make a star-powered case to President Donald Trump and his staff on behalf of a woman serving a life sentence for drug offenses.

Kardashian West has been urging the president to pardon Alice Marie Johnson, 63, who has spent more than two decades behind bars and is not eligible for parole.

It had been unclear whether the socialite would have the chance to sit down with Trump while she was in Washington, but Trump confirmed the meeting — as he often does — via Twitter, writing, “Great meeting with @KimKardashian today, talked about prison reform and sentencing.”

He included a picture of the two in the Oval Office — Trump seated behind his desk and Kardashian West, dressed in all-black, standing to his right. 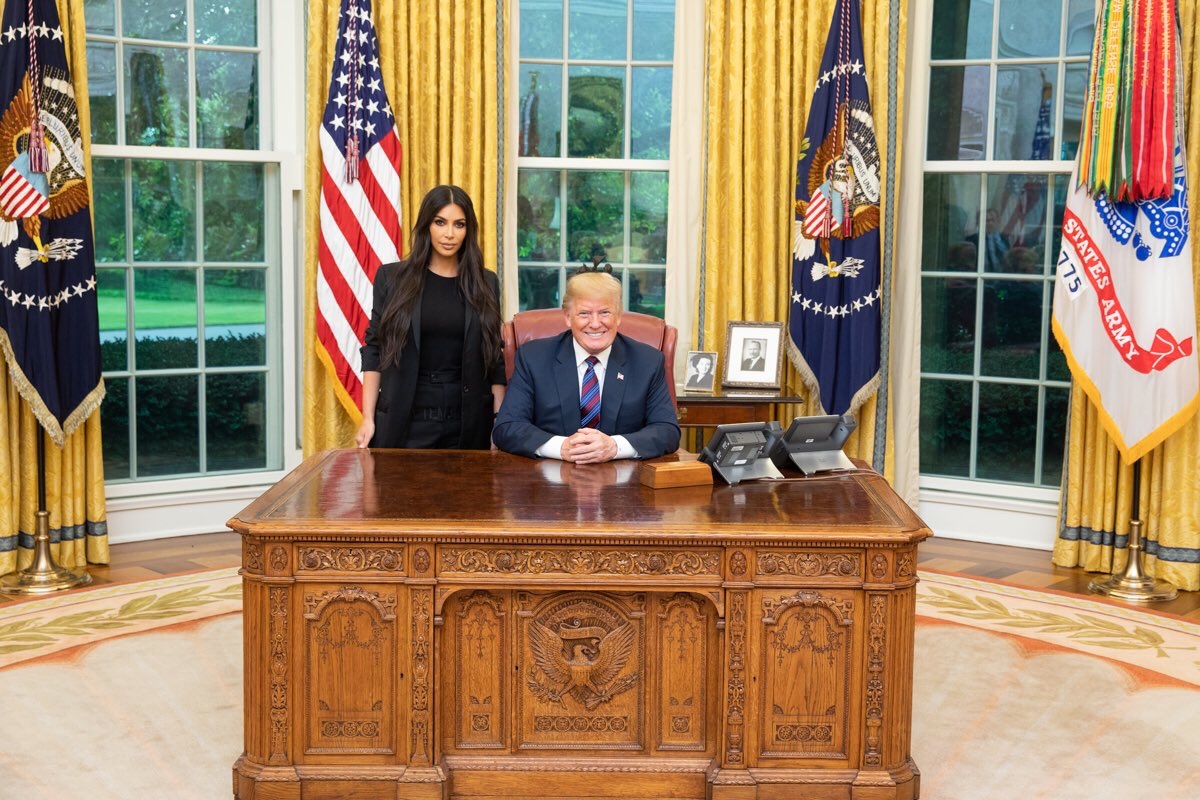 Kardashian West arrived at the White House just after 4:30 p.m. for what was expected to be a meeting with Jared Kushner, Trump’s son-in-law and senior adviser, who is overseeing the administration’s push to overhaul the nation’s prison system. She appeared to preview the visit on her Twitter feed, writing: “Happy Birthday Alice Marie Johnson. Today is for you.”

A rare A-list celebrity to visit the White House since Trump took office, Kardashian West was seen posing for photos in front of the West Wing before entering.

Attorney Brittany K. Barnett, a member of Johnson’s legal team, said Kardashian West had hoped to discuss the issue with Trump directly. She said after the meeting that she had consulted with those who had attended and said it “seemed to go well.”

“It is now in President Trump’s hands to decide whether to save Alice Johnson’s life,” Barnett said.

In an interview with Mic released earlier this month, Kardashian West said she’d been moved by Johnson’s story after seeing a video by the news outlet on Twitter.

“I think that she really deserves a second chance at life,” Kardashian told Mic. “I’ll do whatever it takes to get her out.”

Kardashian West said in the interview she’d been in touch with Kushner over the case and that, if she had the chance to bring it up with Trump, she’d tell him, “I really do believe that she’s going to really thrive outside of prison, and I would just urge him to please pardon her.”

The boxer’s pardon had been championed by actor Sylvester Stallone, who Trump said had brought the story to his attention in a phone call.

Trump has issued just a handful of pardons, including one for former Maricopa County Sheriff Joe Arpaio, a staunch campaign supporter; one for Scooter Libby, who served as chief of staff to Vice President Dick Cheney; and one for a U.S. Navy sailor convicted of taking photos of classified portions of a submarine.

Kardashian West supported Trump’s rival, Democrat Hillary Clinton, during the 2016 election. But her husband, rapper Kanye West, recently offered his support for Trump in a series of tweets, saying they both share “dragon energy.” Kardashian West defended her husband when he caught flak on social media for his tweets.

West also paid a visit to the then-president-elect in New York before his inauguration. Trump said they talked about “life” as they posed for photos in the lobby of Trump Tower. West has said he didn’t vote in the presidential election, but if he had, he would have cast a ballot for Trump.

Trump and members of his administration have spoken passionately in favor of prison and sentencing reform, but that has sometimes clashed with Trump’s law-and-order approach, especially at the Justice Department.

Indeed, Trump has called for getting tougher on drug dealers, including suggesting that some should receive the death penalty.

Johnson was convicted in 1996 on eight criminal counts related to a Memphis-based cocaine trafficking operation involving more than a dozen people. The 1994 indictment describes dozens of deliveries and drug transactions, many involving Johnson.

She was sentenced to life in prison in 1997, and appellate judges and the U.S. Supreme Court have rejected her appeals. Court records show she has a motion pending for a reduction in her sentence, but federal prosecutors are opposed, saying in a court filing that the sentence is in accord with federal guidelines, based on the large quantity of drugs involved. The U.S. Attorney’s Office in Memphis did not immediately respond to a request for comment Wednesday afternoon.

A criminal justice advocacy site, CAN-DO, and one of Johnson’s attorneys say a request for clemency was rejected by former President Barack Obama. The reasons are unclear.

A 1997 Associated Press story on Johnson’s sentencing said she headed up a multimillion-dollar drug ring. But Memphis attorney Michael Scholl, who filed the latest court documents in her request for a sentence reduction, said she was not a leader in the cocaine operation.

“What is the purpose of putting a lady with no prior criminal record, on a nonviolent drug offense, in jail for her entire life?” he said in a telephone interview. “She’s a model inmate.”

Scholl added that Johnson has admitted her wrongdoing, which is borne out in letters she has written to U.S. District Judge Samuel H. Mays, who now oversees her case.

“Judge Mays I’m writing to you to express my deep remorse for the crime that I committed over 20 years ago. I made some bad choices which have not only affected my life, but have impacted my entire family,” she said in a February 2017 letter in the court record.