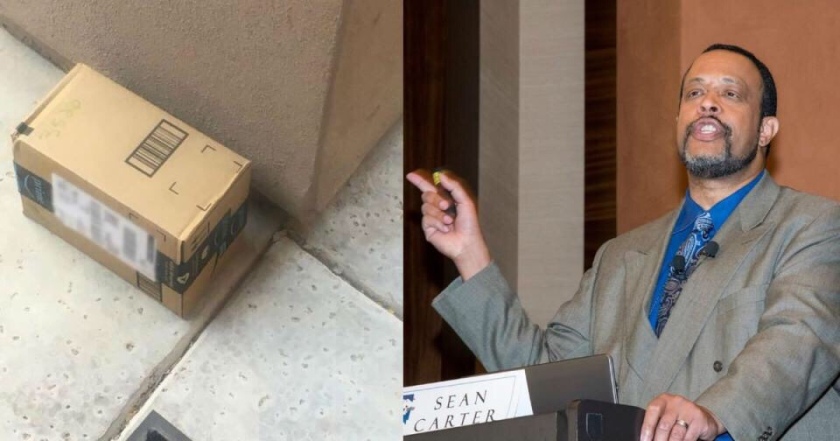 Sean Carter is a Harvard-educated attorney who currently practices law in Arizona. Despite this, he fears every day for his life and the lives of his family – solely because they are black. While many people would say racism is a thing of the past, the minorities of today are opening up about the racism of today. Carter decided to share his experience receiving a package that wasn’t intended for him as an example.

“This package has been sitting outside my house for days now. Why? Because we are black. And yes, I’ll explain,” the Phoenix resident wrote.

The package was apparently addressed to a family that lived just a few blocks down the street. Carter anticipated that people online would ask why he didn’t just bring the package himself, and that is the basis for his post.

“It’s extremely unsafe to send our boys to the home of any family that we don’t know in this predominantly white neighborhood. Why? Because there is a realistic chance that one of my neighbors will see my boy as a threat and call the police or even pull a gun,” he continued.

He recommends anyone that thinks he is exaggerating to google, “Brennan Walker.” Walker is a 14-year-old high school freshman who recently was shot at by a white man after he tried to ask her for directions.

The incident happened in early April after Walker slept in by accident and had to walk to school. He lost his way and approached the house. Walker knocked on the door and found a woman in hysterics. Security footage shows that she cried out to herself, “Why did these people choose my home?” This was just after he knocked on the door.

Jeffrey Ziegler has now been charged with assault with intent to murder and a felony firearm charge according to the local news reports. He could spend the rest of his life in prison after trying to kill this young man who simply tried knocking on a neighbor’s door for help.

“I feel terrible for the young man; I feel terrible for the mom and the anxiety that they had to go through,” Oakland County Sheriff Michael Bouchard said in an interview with WJBK in Michigan. “We are going to ask for every charge permissible for this guy who stepped up and fired a shotgun because someone knocked on his door.”

In his Facebook post, Carter makes a really good point. While some white Americans may think that racism is a thing of the past, the fact is these minorities are legitimately worried about their lives. To the point that they won’t even bring a package to a neighbor – and that is not okay.

“THAT is why the f-king package will be sitting on my porch until UPS retrieves it. Because I can’t trust that my white neighbors won’t see me, a Harvard-educated lawyer (or my 14 yo honor student son) as a roaming homicidal maniac. That’s what it’s like to be black in ‘post-racial’ America,” Carter wrote. 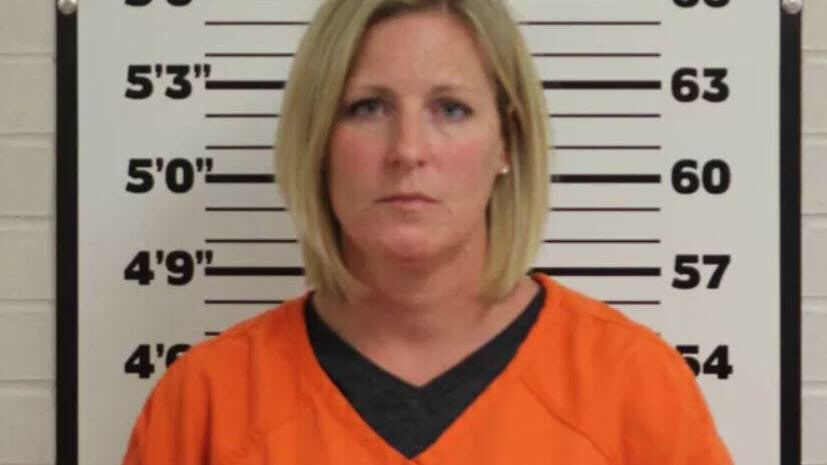 An area assistant principal is facing multiple felony charges after the Missouri State Highway Patrol Division of Drug and Crime Control was called in for a special investigation.

The allegations occurred when the male high school student was 16 years old and Giesler was the assistant principal at Ste. Genevieve High School.

According to a probable cause statement signed by Trooper T.S. Craig, on May 18 the student told Craig that Giesler performed a sexual act on him at her residence in Ste. Genevieve County between April 7-8 during the Riverdog Tourney.

He also said that they engaged in sexual intercourse and sexual acts twice between April and May. These incidents also allegedly occurred at her residence.

Missouri State Highway Patrol Spokesperson Juston Wheetley said their investigation was turned over to the prosecutor and he issued a warrant for her arrest based on their results.

“It was a special investigation we were asked to conduct on the assistant principal and the results were turned over to the prosecutor,” said Wheetley. “We served the warrant on Friday and she was booked into the Ste. Genevieve County Jail where she posted bond.”

Before coming to work for Ste. Genevieve Schools in 2014, she reportedly worked for Liberty School District as a teacher.

• An officer said he watched 30-year-old Otis Dawayne Ryan climb on top of a piece of equipment where children were playing Sunday.

• Earlier in the day, police said Ryan approached tourists and made inappropriate comments to women.

• Ryan was charged with disorderly conduct, found guilty and fined $118.

Authorities say a Florida man climbed on top of playground equipment and yelled a vulgar explanation of where babies come from as the children played.

An officer said he watched 30-year-old Otis Dawayne Ryan climb on top of a piece of equipment where children were playing Sunday in Clearwater and start shouting that babies come out of women. The officer said Ryan used inappropriate language. Parents rushed to remove their children from the busy playground.

Earlier in the day, police said Ryan approached tourists and made inappropriate comments to women in an effort to get their male partners to confront him. An officer was watching him at the time.

Ryan was charged with disorderly conduct, found guilty and fined $118.

The Tampa Bay Times reports he has been released.

Michael Rotondo is seen in court on Tuesday (CNYCentral Photo)

CAMILLUS, N.Y. — A 30-year-old man has been ordered by a judge to leave his parents’ home in Camillus.

In filings to the court last week, parents Christina and Mark Rotondo said they’ve been trying to get their son to leave their home for several months.

The filing includes five written notices that the couple said it has left for Michael, starting with this note on Feb. 2:

After a discussion with your Mother, we have decided you must leave this house immediately. You have 14 days to vacate. You will not be allowed to return. We will take whatever actions are necessary to enforce this decision.

A second note, dated Feb. 13, told Michael he is “hereby evicted” from the couple’s home “effective immediately” and tells him he has until March 15 to move out.

A third note from five days later offers $1,100 to Michael “so you can find a place to stay,” according to the filing. It also offers advice:

1) Organize the things you need for work and to manage an apartment. Note: You will need stuff at [redacted]. You must arrange the date and time through your Father so he can set it up with the tenant.

2) Sell the other things you have that have any significant value, (e.g. stereo, some tools etc.). This is especially true for any weapons you may have. You need the money and will have no place for the stuff.

3) There are jobs available even for those with a poor work history like you. Get one — you have to work!

4) If you want help finding a place your Mother has offered to help you.

The fourth message, dated March 5, notes the upcoming March 15 deadline to leave and says, “So far we have seen no indication that you are preparing to leave.” It adds, “Be aware that we will take any appropriate actions necessary to make sure you leave the house as demanded.”

The fifth message, dated March 30, presents solutions for an issue over Michael’s car, which, according to the filing, was sitting at the couple’s home.

According to filings by the couple, they have been informed that because Michael is a family member, they can only have him removed from the home through an ejectment proceeding.

Rotundo was frustrated with the judge and said in court Tuesday that he didn’t think the judge fully read the case.

Rotundo said he will appeal the judge’s decision.

• A Russian cruise missile that the country touted as having “practically unlimited” range appears to be falling short.

• The cruise missile’s longest test flight only lasted two minutes and 22 miles before losing control, according to a CNBC report.

• Russia’s cruise missile capabilities may have missed the mark, but sources said it succeeded in other ways that the US may be incapable of defending.

A Russian cruise missile that the country touted as having “practically unlimited” range appears to be falling short, sources with knowledge of a US intelligence report told CNBC.

The cruise missile, which Russian President Vladimir Putin unveiled at a Russian Federal Assembly in March, only flew for around two minutes and traveled 22 miles before it lost control and crashed, CNBC reported Monday. Another missile test reportedly lasted just four seconds with a distance of five miles.

Russia tested the missile four times between November and February at the behest of senior officials, even though engineers voiced doubt over the program, according to CNBC’s sources.

Putin previously touted a new generation of weapons in a presentation that displayed missile trajectories going from Russia to the US. In addition to the cruise missile, Putin teased unmanned underwater drones purportedly capable of carrying a nuclear warhead, and a hypersonic glide vehicle.

“I want to tell all those who have fueled the arms race over the last 15 years, sought to win unilateral advantages over Russia, introduced unlawful sanctions aimed to contain our country’s development: All what you wanted to impede with your policies have already happened,” Putin said in a speech. “You have failed to contain Russia.”

Russia’s cruise missile capabilities may have missed the mark, but sources said it succeeded in other aspects. The hypersonic glide vehicle, which is believed to be able to travel five times the speed of sound, would render US countermeasures useless and could become operational by 2020, according to CNBC.

“We don’t have any defense that could deny the employment of such a weapon against us,” US Air Force General John Hyten, the commander of US Strategic Command, said at a Senate Armed Services Committee hearing in March.