The shooter who took her own life after wounding four YouTube employees at the video hosting website’s San Bruno, California, offices on Tuesday has been identified as Nasim Aghdam in multiple reports, after being described as a “white woman in a headscarf” earlier in the day.

Aghdam, said to reside in Southern California, had a long history of animal rights activism, and was quoted by the Los Angeles Times at a protest of the U.S. Marine Corps’ use of pigs to demonstrate battlefield wounds in 2009. She ran a series of very similar websites espousing vegan views.

In one video post on video hosting service Dailymotion, she claims to be from Iran in an introduction to a mock appearance on America’s Got Talent.

“There is no equal growth opportunity on YOUTUBE or any other video sharing site, your channel will grow if they want to!!!!!” she declared on one of her websites, among one of many statements criticizing the company across her other websites and extensive social media presence, sometimes using the name Nasime Sabz Yeşil Nasim. 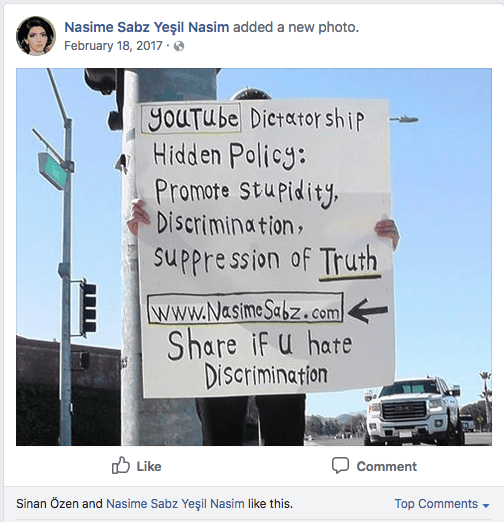 Aghdam herself had several YouTube accounts, posting dozens of videos espousing a pro-animal rights viewpoint as well as videos of herself dancing or demonstrating exercise moves in front of green screen backgrounds. Her accounts began to be locked shortly after her identification as the shooter, but screen grabs like the one below show content typical of the animal rights-focused videos.

Aghdam also appears to have maintained at least two Instagram accounts, frequently captioning her posts in her — presumably native — Persian language. She makes frequent reference to Iran and the Azeri ethnic group that resides primarily in Iran and neighboring Azerbaijan.

A post on the website of the “Interfaith Vegan Alliance” refers to her by the name Nasime Sabz, and claims she is an adherent of the Baha’i faith, which is persecuted in Iran, seeming to claim she once ran a “TV show on Persian Satellite.”