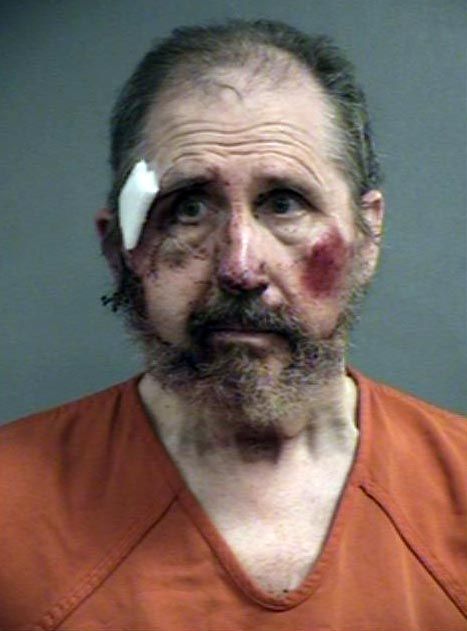 LOUISVILLE, Ky. — Police say a man opened fire on Louisville Metro Police officers with an air rifle Thursday night, and in the ensuing scuffle, one officer was injured.

According to arrest reports, officers were called to a home on East Kenton Street, near South Brook Street, just after 6 p.m. on March 29, after someone reported that a domestic violence assault was taking place there.

When officers arrived, they spoke with the wife of 68-year-old Oscar Walters, who said her husband had attacked her with a flashlight.

Police say they could see that she had suffered some type of serious head injury after being hit on the head several times. She had to be transported to University Hospital.

At that point, police say three officers went to the front door of the home to try to talk to Walters. That’s when Walters allegedly pointed an air rifle at the officers and opened fire.

Police say the projectiles from the air rifle shattered the glass on the front door and officers had to take cover.

After firing the rifle, police say Walters came out of the home and they tried to take him into custody, but Walters refused to give up his hands. After a brief struggle, officers were eventually able to subdue him, but not before one of the police officers suffered a fractured right hand.

That officer was taken to Jewish Hospital. According to the arrest report, the injury will require surgery to fix.

He is currently being held in Louisville Metro Corrections.